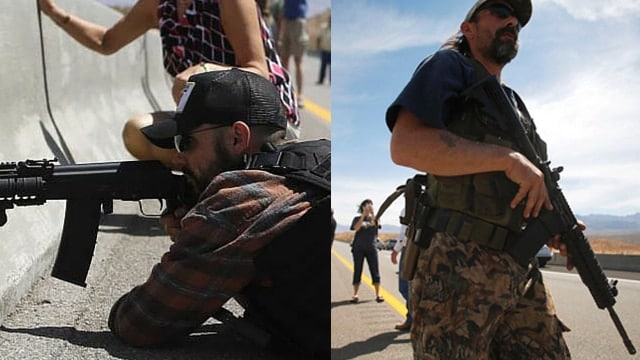 Eric Parker, left, and Scott Drexler on a bridge overlooking the Battle of Bunkerville standoff in April 2014. (Photo: Jim Urquhart/Reuters)

After two hung juries and a third trial on the way, two Idaho men accepted plea deals Monday for their roles in the Battle of Bunkerville standoff.

Eric Parker, 34, and Scott Drexler, 47, each pleaded guilty to one count of obstruction of a court order, a misdemeanor, according to a press release from the U.S. Attorney’s Office in Nevada.

Both men were facing a slew of charges related to a six day armed standoff between dozens of armed protestors and U.S. Bureau of Land Management officials in April 2014. People came from all over the country to support rancher Cliven Bundy, who spent decades refusing to pay grazing fees to the federal government.

When BLM officials came to round up Bundy’s cattle in lieu of the $1 million in backed fees, Bundy, his sons, and several others launched what prosecutors called “a massive armed assault against federal law enforcement officers.”

“BLM officers continuously ordered the people to disperse and leave the area, advising that they were interfering with the execution of federal court orders,” says Drexler’s plea agreement. “Defendant Drexler heard the officer’s announcement but he did not comply with the orders.”

“By maintaining a presence on the bridge overlooking the officers while armed with a rifle, Defendant Parker presented a show of force to the officers and did thereby willfully interfered [sic] with and impeded the officers in the performance of their duties pursuant to federal court orders,” says Parker’s plea agreement.

No shots were fired and the standoff ended when BLM agents retreated. But 19 people were arrested in connection with standoff. Parker and Drexler were due back in court for a third trial at the end of this month.

“We started off with 11 different felonies with the possibility of life in prison,” said Parker’s attorney, Jess Marchese. “Now we are talking about a year of probation.”

Sentencing for the two men has been scheduled for February. They’re expected to get credit for time served. The trial for Cliven Bundy and his sons is set to begin Oct. 30.