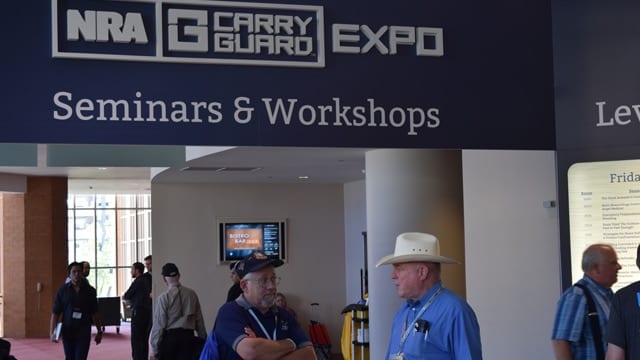 New York regulators launched an investigation into the National Rifle Association’s role in the self-defense insurance program that bears its name.

The probe by the state’s Department of Financial Services will focus on whether the gun lobby is improperly promoting the policy and receiving commissions without a proper license, The Wall Street Journal reported.

The NRA released NRA Carry Guard insurance at its annual conference in April. The program — underwritten by Chubb Ltd and administered by Lockton Cos — offers policies to cover legal fees for patrons who claim self defense after a shooting. Lockton told the Associated Press that they’re cooperating with investigators.

The New York department launched the probe a week after advocacy groups Guns Down and Color of Change launched a campaign, dubbed “Stop Murder Insurance,” to pressure Chubb and Lockton to drop NRA’s business.

A video promoting the campaign featured the mother of Trayvon Martin, whose death has become part of a national dialogue when discussing self-defense shootings. Martin was killed walking home from a store after a brief struggle with an armed neighborhood watch captain, George Zimmerman.

During the February 2012 incident, Zimmerman saw Martin, an unarmed black teen wearing a hooded sweatshirt, walking through the gated community in Sanford, Florida. He thought Martin looked “suspicious,” so he called the police and followed him. But Zimmerman backed off when the operator told him to stop. At some point afterward, Martin and Zimmerman engaged in a struggle and Martin was shot and killed.

Zimmerman claimed he shot Martin in self defense, but police charged him with murder. Although Zimmerman’s attorney didn’t argue a “Stand Your Ground” defense, which the video discussed, many believed the law set a dangerous standard permitting people to respond to a situation with violence. A jury later acquitted Zimmerman of the charges.

In the video, Martin’s mother Sybrina Fulton described the gun lobby as pushing for more and more people to carry guns in public and them portraying a distorted reality in which people should fear immigrants and people of color over footage of armed protestors at white nationalists rallies and a white supremacist walking out of a church after murdering nine black parishioners in Charleston.

“They spend millions lobbying for laws that allow them to shoot first and stand their ground. But that just makes it easier to get away with murder,” Fulton said. “Now they’re selling insurance that covers the cost when a gun owner kills someone and claims self-defense.”

The NRA reacted to the campaign, as described in the Associated Press article, through an Op-Ed published in its magazine NRA America’s 1st Freedom. Conservative columnist Stacy Washington disputed the characterization of the policies as “murder insurance” and argued “no insurer offers policies to mitigate the consequences of a conviction for murdering another person.”

According to the fine print, NRA Carry Guard’s policies protect patrons who lawfully use a gun in self-defense, meaning the policies payout once a court acquits the patron of any charges or wins a civil suit.

As for the racial component, Washington, who is a black woman, said: “While I feel much sorrow for the loss of Fulton’s son, the incident was adjudicated in a court of law, and we must move on. Not every action taken by gun owners or the NRA is related to the Travon (sic) Martin shooting.”

“There is no ‘moral hazard’ in offering an insurance and training product to the most lawful segment of American society — law-abiding gun owners,” she continued. “The fact that NRA Carry Guard is available is another freedom that should be celebrated or — in the case of gun-grabbers — tolerated.”

It’s unclear how successful NRA Carry Guard has been since it launched earlier this year. The program’s competitor USCCA generated some $37.5 million in annual revenue in 2016, according to the company’s profile in Inc Magazine, which has the company ranked as one of the top 5,000 companies in the country six years in a row. However, Chubb is scheduled to release quarterly financial filings this week and host an earnings call with investors on Friday.