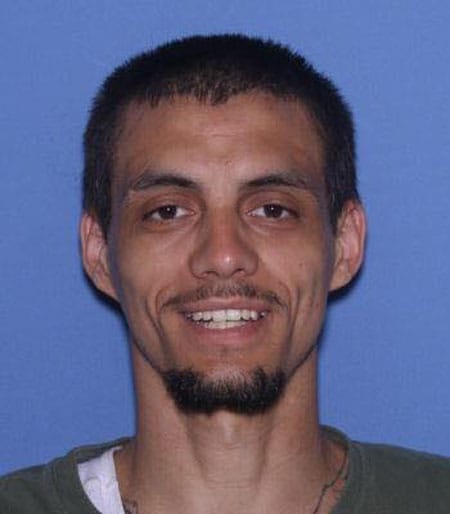 Jonathan Ware was find hiding in a trash can after one day on the run. (Photo: Jonesboro Police Department)

After just one day on the run, a wanted fugitive is back in police custody thanks, in part, to an armed homeowner in Jonesboro, Arkansas.

Ware was in the custody of the Harrisburg Police Department Tuesday when he escaped. According to a news release from the Jonesboro Police Department, Ware was arrested following a domestic disturbance in which he was injured and taken to the hospital for medical treatment.

However, as Ware was being transported back to the police department, he managed to get his handcuffs in front of him and break the glass in the rear door of the patrol car. Ware then jumped from the moving vehicle. Ware’s escape led to a massive multiple-agency manhunt, but he wasn’t found until the following morning.

The homeowner who found Ware said he was walking his wife to her car that morning around 6:30 a.m. when he heard something, then noticed his trash can move. He opened the lid to find Ware hiding inside, still in handcuffs and still wearing the same clothes in which he escaped. The homeowner then held Ware at gunpoint until police arrived, about a minute later.

Ware was taken into custody at the home without further incident. Now, in addition to the felony second-degree battery charge he was originally facing, he also faces charges of mischief, escape, fleeing, and criminal trespassing. Ware, who has a lengthy criminal history which includes at least one prior escape, is currently being held at the Poinsett County Detention Center.

Harrisburg police said Wade’s original assault charge stemmed over a dispute Tuesday morning with another man, John Worsley. The dispute erupted after Worsley told Ware to stop harassing his mother, prompting Ware to strike Worsley in the head with a gold club. Worsley, in turn, stabbed Ware in the lower back, he claimed, in self-defense. Ware was taken to the hospital for treatment of the stab wound when, on the way back to the police department, he made his escape.