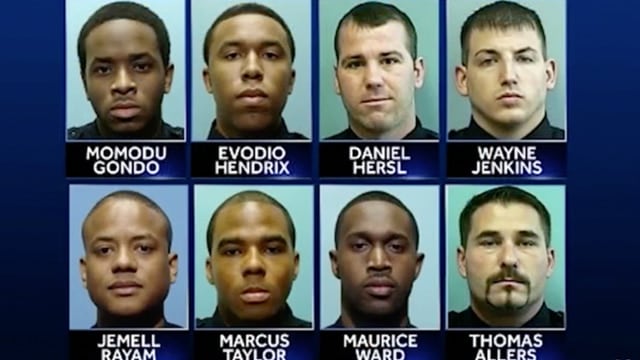 The eight officers who worked in the Gun Trace Task Force with the Baltimore Police Department are accused of shaking down citizens, falsifying court documents, and overtime fraud. (Photo: WBAL-TV)

Two former members of an elite gun unit with the Baltimore Police Department testified Wednesday about the crimes the group committed.

One of the former officers, 34-year-old Momodu Gondo, accepted a plea agreement back in June. Now serving as a government witness, Gondo took the stand Wednesday and talked in detail about how the Gun Trace Task Force operated.

“Did you rob citizens when you executed search warrants,” a prosecutor asked, according to WBAL.

“What did you steal?” the prosecutor asked.

“How much did you steal?” asked the prosecutor.

Gondo, nicknamed “G Money,” and six others were first arrested and indicted back in March. All of them were members of the Gun Trace Task Force, which works to get illegal guns off Baltimore’s streets. The men are accused of shaking down citizens for cash, falsifying court documents, and overtime fraud. An eighth officer was arrested and indicted in August.

The men stole money and drugs from citizens during traffic stops, after detaining them, and after falsifying affidavits to obtain search warrants and entering their homes, according to court records. They would turn off body cameras when they needed to, prepare false reports to conceal what they’d stolen, and coach one another on one how to give false testimony.

Gondo is named in a second indictment for a drug dealing conspiracy. Authorities started looking into the group of officers after a Drug Enforcement Administration investigation into Gondo.

In court on Wednesday, he said the head of the gun squad, Sgt. Wayne Jenkins, was completely out of line. “Jenkins was reckless, out of control, putting citizens at risk, overly aggressive. I never saw anything like it,” Gondo said.

He and his partner said they only ever committed crimes while in uniform. “The most I did were robberies while working, never outside of work,” Gondo said.

“Most of our robberies were as police officers, so we weren’t too worried about getting caught,” said Jemell Rayam, Gondo’s partner who also testified Wednesday.