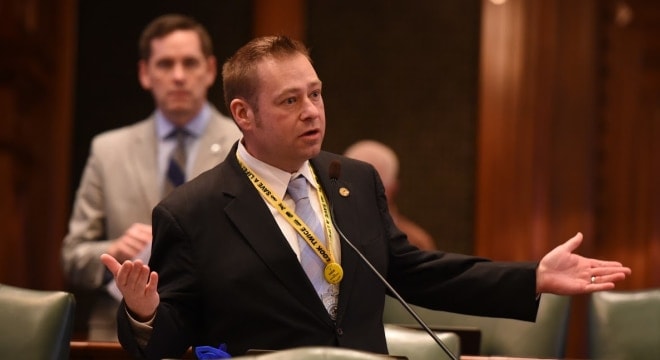 Illinois state Representative Allen Skillicorn argued HB 4117 “would have turned law-abiding citizens into felons had it not failed in the House today.” (Photo: Rep Skillicorn)

A number of downstate Democrats jumped ship and joined Republican lawmakers to oppose a bill targeting semi-automatic firearms that many deemed an overreach.

Needing 71 votes to pass the body, Dems could only garner 48 after several defections bolstered a GOP stand against the bill, designed to restrict any part, or combination of parts, intended to accelerate a gun’s rate of fire without converting it into a machine gun.

“House Bill 4117, as so often happens, was too hastily and poorly crafted in response to a terrible situation,” said state Rep. Allen Skillicorn, R-East Dundee. “Because of this, the bill failed to address the fear it was attempting to protect against and instead would have turned law-abiding citizens into felons had it not failed in the House today.”

Rushed through the House Judiciary Committee on a partisan vote earlier this week, opponents of the measure argued it banned not only now-vilified bump stocks but also just about anything that could improve how a gun fires, in effect slapping new regulations on most firearms in the state.

State Rep. Marty Moylan, D-Des Plaines, sponsor of the tanked bill, said he would consider amending his proposal to win over those still on the fence but cautioned a Republican-sponsored alternative narrowly focused just on bump stocks wasn’t strong enough of a prohibition, The Chicago Tribune reported.

However, Moylan’s window to act is rapidly closing. The Illinois General Assembly is in a short veto session scheduled to end by mid-November.