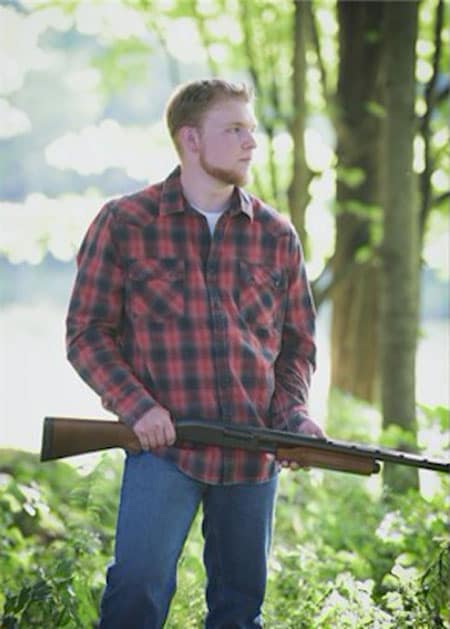 A high school senior from Standish, Maine, has gained national attention after his school rejected his senior photo because it showed him holding a gun.

“It’s crazy,” Wade Gelinas said in an interview with WLBZ. “All the attention. I still can’t believe just over a little Facebook post, me ranting a little bit.”

Gelinas is an avid hunter, so when it came time to submit his senior photo for the Bonny Eagle High School yearbook, it only seemed natural to the teen to include a photo with his shotgun. The school, however, shot down the photo, so Gelinas took to social media to voice his irritation.

Nonetheless, Bonny Eagle Principal Lori Napolitano stood by the school’s decision, citing the code of conduct, which prohibits weapons of any kind on school grounds and prohibits students from wearing clothing with images of guns or other weapons. Although she acknowledged Gelinas’ disappointment, Napolitano said those policies extend to the yearbook as well.

“Drugs, alcohol, weapons, tobacco are not allowed at school, and you cannot wear clothing that has pictures of weapons on it,” Napolitano told WCSH. “We just want to draw the line at weapons of any kind being in the picture and that way we’re not trying to pass judgment on which ones are promoting violence or which ones aren’t.”

Gelinas hoped the attention would lead to a change in school policy, but it appears his wish will not be granted. “It’s just my sport,” Gelinas said. “It’s just what I do. I don’t play football. I don’t play basketball. I just hunt.”