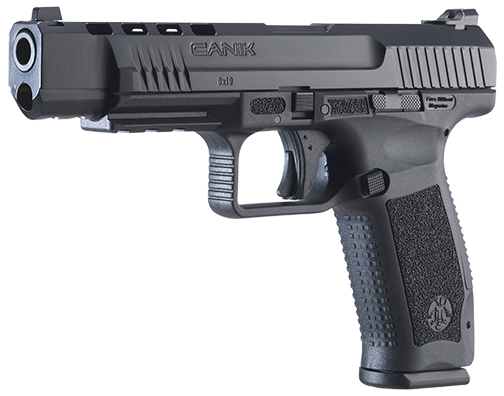 Canik delivers the latest addition to its TP9 series of handguns, launching the new TP9SFL, now on its way to dealers and consumers.

The long slide TP9SFL serves as the tactical version of Canik’s TP9SFX competition-ready pistol. Chambered in 9mm, the all-black pistol measures 8.27-inches in overall length with a 5.2-inch barrel. Tipping scales at 1.87-pounds unloaded, the pistol boasts an 18+1 capacity. Fitted with features such as forward slide serrations, Warren Tactical sights, and lightening cuts on the slide. The lightening cuts act to reduce muzzle flip and felt recoil while also keeping the barrel cool.

“The TP9SFL handgun, with its added sight radius, has the potential to be used not only as a self-defense pistol, but also as a competition gun.” said Jason Karvois, Century Arms Director of Sales, in a press release. “It shares favorable features with the TP9SFx, Canik’s race-ready competition model, while having all the features needed in a full-size duty pistol.”