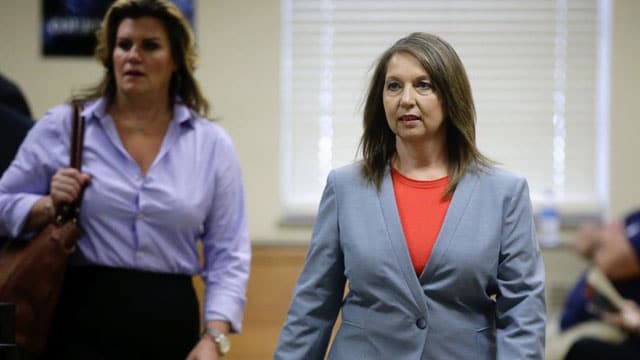 A state judge ruled to expunge the manslaughter charge from the record of a Tulsa cop who fatally shot an unarmed black motorist during a traffic stop last year, according to court records filed last week.

Judge William LaFortune ordered to seal all documents involving former Tulsa police officer Betty Jo Shelby’s case. Documents will only be accessible through a court order and can be destroyed after 10 years.

Shelby’s attorney, Shannon McMurray, told the Associated Press that the charge likely won’t appear on a background search, except when applying to jobs with government and law enforcement, which usually require those details be disclosed.

“This crime does not exist for employment application purposes,” McMurray said, adding it was important for Shelby “to have that smear on her name removed from public view.”

Shelby petitioned the court in August — around the same time she took a reserve deputy position with the Rogers County Sheriff’s Office — for the expungement order, about three months after the court acquitted her of manslaughter. In May, she returned to the Tulsa Police Department and given an administrative position instead of returning to patrol. She resigned two months later.

After the fatal shooting, Shelby was originally charged with first-degree manslaughter, but she has continually maintained that she acted out of fear when she shot the 40-year-old as he stood by his SUV, which was stopped in the middle of the road. Crutcher, who an autopsy later revealed was high on PCP, repeatedly ignored commands from Shelby and other responding officers.

Part of the encounter was captured on video from dash and helicopter cameras, but the actual shooting was blocked from view. Shelby, a drug recognition expert who believed at the time Crutcher was under the influence of drugs, said she fired as Crutcher appeared to reach into his vehicle. Although drugs were found in Crutcher’s SUV, no weapons were recovered.