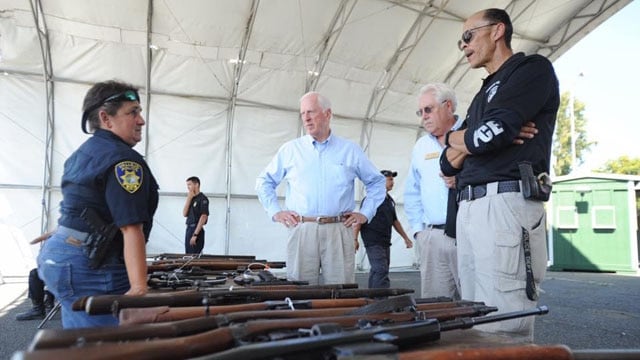 A new bill introduced last week aims to strengthen the federal government’s ability to keep guns out of the wrong hands — and it needs states’ help to do it.

The Safer Communities Act of 2017 — a joint effort sponsored by California Democratic Congressmen Mike Thompson and Ed Perlmutter — would expand and clarify existing categories of prohibited gun owners, extending the ban to include involuntary outpatient commitment.

The proposal also offers states grant money to enact gun violence prevention legislation — such as laws granting courts the ability to temporarily revoke ownership rights from a person suspected of harming themselves or others — and encourages states to bolster its submissions of disqualifying records to the National Instant Criminal Background Check System.

“After nearly every gun violence tragedy, we’ve heard many say that guns are not the problem, mental health is. The Safer Communities Act we’ve introduced today would address that problem and keep guns out of the hands of the dangerously mentally ill,” Thompson said Thursday. “While those suffering from mental illness are far more likely to be victims than perpetrators of violent crimes, we recognize that improving our mental health system, and keeping firearms from those with other risk factors such as a history of substance abuse disorders and violence, can help prevent gun violence.”

The proposal mandates the FBI upgrade its alert system so state and federal law enforcement can pursue cases where prohibited persons attempt to buy guns. The term “mentally defective” found in existing statute would also be replaced with “ineligible due to disqualifying mental status.”

“This is a common sense proposal to reduce the likelihood of individuals suffering from mental illness from accessing firearms,” Perlmutter said. “It’s important to keep guns away from individuals who pose a threat to themselves or others and instead provide them with the mental health services they need. We’ve seen far too many tragedies in our communities and we must take steps to prevent future tragedies by making gun violence less easy, less frequent and less deadly.”

Since kicking off its campaign five years ago, the numbers of disqualifying records uploaded to NICS increased 170 percent. Legislation passed in 16 states boosted the number of records provided to NICS from 1.6 million in 2012 to almost 4.5 million in 2016.

“This significant increase is driven by states like Pennsylvania, which now has 794,589 records, compared to one in 2012,” NSSF Senior Vice President and General Counsel Larry Keane said. “New Jersey, another FixNICS success story, has now submitted 431,543 records, up from 17 in 2012, and is now ranked as the second best state on a per capita basis.”

Thompson and Perlmutter serve as the two highest ranking members of the House Gun Violence Prevention Task Force, convened in the weeks after the December 2012 Sandy Hook shooting. The proposal, introduced as H.R. 4142 Thursday, awaits consideration.