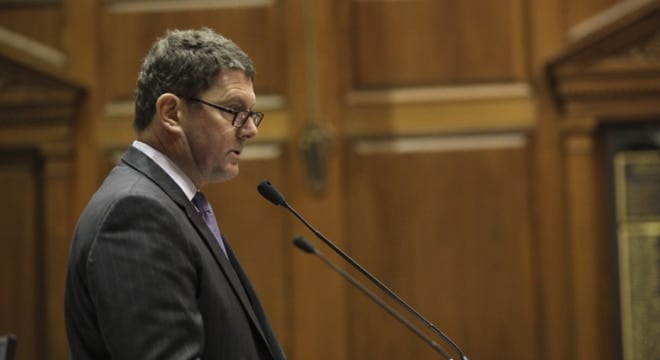 A study committee to consider whether Indiana should no longer require a license before you can carry a handgun in public issued its findings on Monday.

After a summer of meetings, the Joint Committee on Judiciary and Public Policy voted 15-5 in favor of urging the General Assembly to “remove hurdles that restrict the ability of law-abiding Hoosiers to exercise” their right to bear arms. While the panel urged keeping the current system of concealed carry permitting in place “for reciprocity purposes” it did not outright endorse permitless concealed carry. However, some on the panel see the recommendation as a victory.

“I believe it’s wrong to require a license to exercise a Constitutional right,” said state Rep. Jim Lucas, R-Seymour who plans to introduce a measure next year to bring constitutional carry to the state. “The only people who would be affected by this would be those innocent people that currently have to fill out lengthy forms online, take time off work to get fingerprinted and pay a fee of up to $140 to get a card to prove their innocence — all to receive a license.”

Lucas wants to eliminate the law requiring a lawful person to obtain a license to carry a firearm. People who have felony convictions are under 18 years of age or otherwise not legally permitted to carry a firearm would remain ineligible.

Not all agreed with the committee’s recommendations, which are non-binding. “We wasted our time,” said state Rep. Vanessa Summers, a Democrat from Indianapolis who voted against it. “I think we should have a defined line. I believe that in our city and state we need to have licensing for guns.”

Gun control advocates chalked up the committee’s findings as a win as it included a recommendation to keep the state’s licensing scheme running, refrained from outright championing constitutional carry and suggested better tools to identify people with mental health issues.

“After taking a close look at this issue and hearing from Indiana law enforcement, our lawmakers stood up for public safety and refused to give the gun lobby what it wanted,” said Beth Stringer, with Moms Demand Action, in a statement. “Indiana’s license requirement for carrying a loaded handgun in public is a popular, common-sense law, and law enforcement officials have made it clear that it helps them protect our communities.”

According to statistics from the Indiana State Police, the state began the year with 776,379 active licenses in circulation, up from 661,364 in 2015.