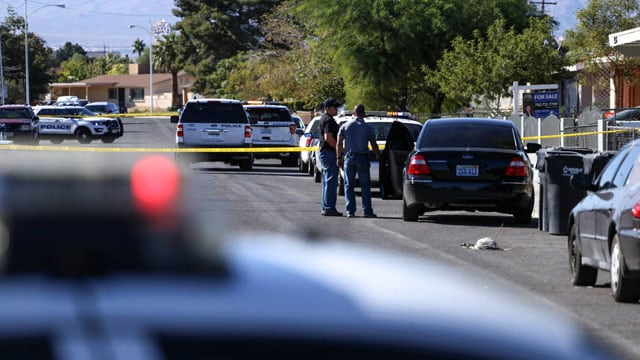 Authorities investigate after a man was killed in a domestic dispute outside of a North Las Vegas home Friday afternoon. (Photo: Las Vegas Review-Journal)

North Las Vegas authorities say Friday’s shooting death of a 31-year-old man during a domestic dispute appears to be an act of self-defense.

“All of the evidence and witnesses indicated the shooting was in self-defense,” Officer Eric Leavitt told reporters. He said investigators based that conclusion off of two eyewitness statements and information from about 10 others who described the incident.

In a statement, police said the shooting happened around lunchtime after an argument between the man and a 26-year-old woman turned physical and the woman opened fire, striking the man. When police arrived, officers found him with multiple gunshot wounds. He was pronounced dead at the scene.

In the driveway of the residence where the shooting occurred, there was a white sedan with a busted window, although it wasn’t immediately clear if the vehicle damage was related to either the dispute or the shooting, The Las Vegas Review-Journal reported.

Authorities have not released the names of either the man or the woman involved, but the parents of the deceased man spoke with reporters and said the woman who shot him was his wife. They also said the couple has two children together, although it’s unclear if they were home at the time of the incident.

The parents described their son to reporters as a man who was raised amidst a negative environment in Compton, California. They said he became involved with gangs and made other poor choices before finally moving from Compton to North Las Vegas with his wife and two daughters.

The man’s parents said he was on the right track and doing good when he was killed, and question the claim of self-defense. However, they also said that this wasn’t the first incident with the couple, and in fact, the woman had shot at the man in the past.