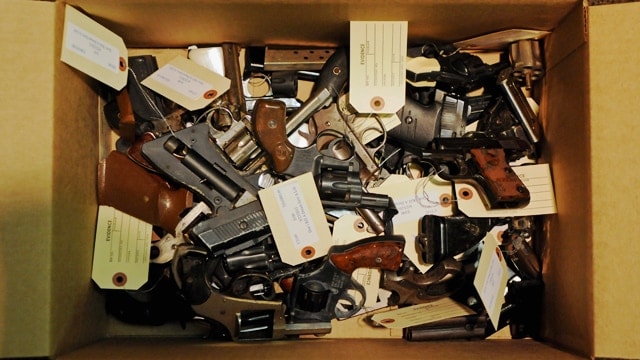 A report released Sunday details where thousands of Chicago crime guns came from in recent years.

The Gun Trace Report was put together by the University of Chicago Crime Lab together with the Chicago Police Department.

The new report focuses on about 15,000 recovered weapons, all of them bought at about 5,000 federally licensed dealers in Illinois and elsewhere.

“It is self-evident that the availability of illegally circulated firearms in Chicago is directly connected to its deadly street violence,” the report says in its introduction. “Simply put, each conflict becomes potentially more lethal due to easy access to a gun.”

As of Oct. 30, at least 568 people have been killed in Chicago so far this year, the vast majority of which were killed with a gun. “In an unfortunate but persistent reality, certain retailers and jurisdictions disproportionately account for the guns trafficked into Chicago that sustain its illegal gun market and associated violent crime,” the report says. 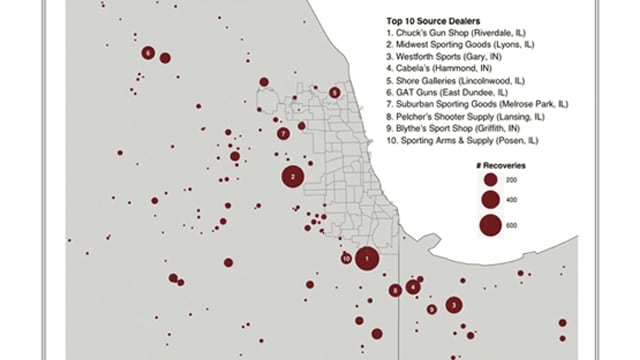 Chuck’s Gun Shop in Riverdale, Illinois and Midwest Sporting Goods in Lyons, Illinois are the retail source of more than one in ten crime guns recovered in Chicago, according to the report. (Photo: Gun Trace Report)

“Collectively, these ten source dealers make up almost a quarter of the crime guns recovered in Chicago, despite the existence of many other federally licensed dealers in Chicago’s vicinity,” the report says.

Drawing on data over the last decade, the report posits that a majority of illegally used or possessed guns recovered in Chicago “are traced back to states with less regulation over firearms, such as Indiana and Mississippi.”

“More than two of every five traceable crime guns recovered in Chicago originate with their first point of sale at an Illinois dealer,” the report says. “The remaining 60 percent of firearms come from out of state, with Indiana as the primary source for approximately one out of every five crime guns.” 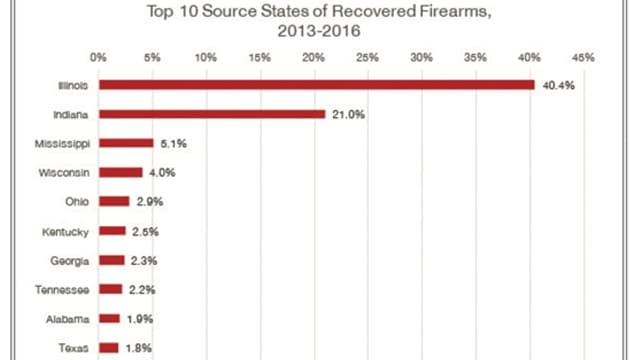 The report offers up a number of state and federal solutions. At the state level, the authors of the report say passage of the Gun Dealer Licensing Act would help deter straw purchasing and help law enforcement in gun trafficking investigations.

Researchers also suggest comprehensive background checks on private gun sales in Illinois, as well as more effective enforcement of the state’s lost and stolen reporting law, and the implantation of a gun registry.

“When discussing gun policy, a familiar saying is often repeated: ‘guns don’t kill people, people kill people,’” the report says. “While the statement is primarily used to argue against gun regulations, it ironically strengthens the case for creating a comprehensive system for tracking the chain of custody over firearms.”

“People do kill people, and disproportionately use firearms to do so. Illinois should do everything in its power to develop a regulatory framework that helps law enforcement identify the very people who illegally traffic guns and put them in the hands of violent criminals.”

At the federal level, researchers suggest passage of the Gun Trafficking Prevention Act, comprehensive background checks on all gun sales, an increase in ATF resources, regulation and tracking of online gun sales, and other regulatory measures.

“Illinois can and must do better to reduce the flow of guns from in-state FFL dealers,” the report says. “But even with this necessary step forward to regulate in-state firearm sales, Chicago remains uniquely vulnerable to interstate firearms trafficking due to surrounding states with weak regulations over the primary and secondary gun sale markets, including Indiana, Wisconsin, and Kentucky.”