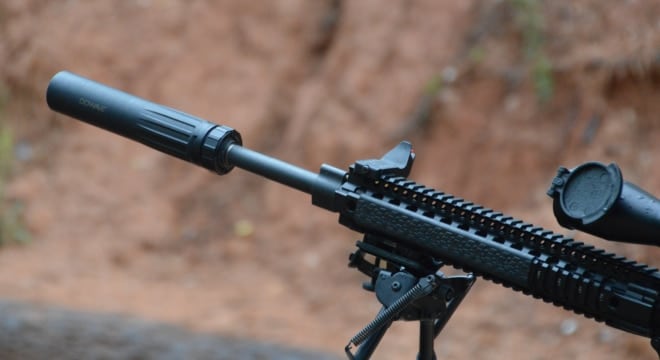 The Hearing Protection Act may be dropped from the legislation while language addressing bump stocks may be added now that the bill is in a “sort of a cooling off period” after the Las Vegas shooting. (Photo: Chris Eger/Guns.com)

An omnibus sportsmen’s package of legislation in the House that has drawn fire for its plan to curb regulations on suppressors may be reworked.

According to E&E News, an outlet that covers energy and environmental issues, the Sportsmen’s Heritage and Recreational Enhancement Act, or SHARE Act, is still a priority for Republicans but could see some modifications from the version that passed the House Committee on Natural Resources last month.

Sponsor of the bill, U.S. Rep. Jeff Duncan, R-S.C., said the most divisive of the 16 sections of the SHARE Act — removing suppressors from National Firearms Act control — may be dropped from the legislation while language addressing bump stocks may be added now that the bill is in a “sort of a cooling off period” after the Las Vegas shooting.

In the days immediately after the event that claimed the lives of 58 and sent hundreds to area hospitals, potential suppressor deregulation was a popular line in the sand drawn by everyone from Democrats on Capitol Hill to frequent presidential candidate Hillary Clinton, even though the shooter did not use the devices.

In addition to the suppressor language, the bill in its current form would open the 11.7 million acres of land controlled by the U.S. Army Corps of Engineers to concealed carry and protect travelers crossing state lines with firearms.

Other facets would cut the ATF’s authority to reclassify popular rifle ammunition as “armor piercing” and how regulators classify some shotguns, shells and rifles as “destructive devices” under the NFA. It also allows changes to the Pittman-Robertson Act to expand the allocation of already authorized funds for use in public shooting ranges while limiting restrictions on traditional ammunition and fishing tackle and scaling back protections for gray wolves. “There’s a lot of stuff in there for sportsmen,” Duncan said.

On prohibiting bump stocks, while sweeping proposals to regulate a host of trigger enhancements and accessories have 175 Democrats and a dozen Republicans in the House signed up to support, the prospect of the bills leaving committee are slim, which means attachment to the SHARE Act could provide political cover for Democrats to support the measure.

A successful vote in the House would send the proposal to the Senate, who passed a similar package last year– the Bipartisan Sportsmen’s Act– though without addressing silencer deregulation.