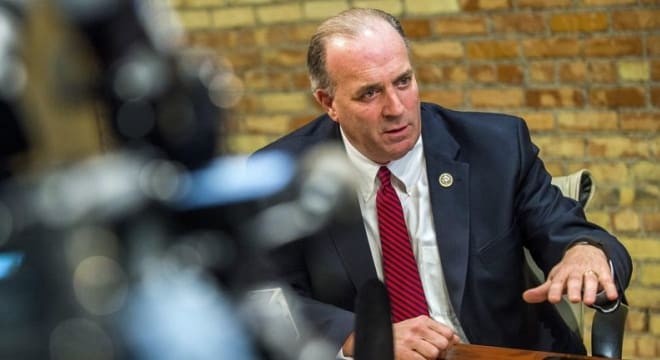 U.S. Rep. Dan Kildee, D-Mich, is among House lawmakers who want to treat bump stocks “or any other devices designed to accelerate substantially the rate of fire of a semiautomatic weapon” the same way as machine guns. (Photo: Jake May/The Flint Journal-MLive.com)

A bipartisan bill introduced in the House this week would fall short of banning bump stocks outright, instead opting to regulate them under the National Firearms Act.

The legislation, proposed by two Democrats and two Republicans, would require that the devices be registered to include an extensive background check, fingerprinting and a $200 tax on the items, effectively the same regulation as for making and transferring machine guns.

“This bill will not prevent all senseless gun deaths—rather, it seeks to address one dangerous loophole in existing law that allows anyone to acquire a bump stock, no questions asked,” said U.S. Rep. Dan Kildee, D-Mich, a sponsor of the legislation alongside Nevada Democrat Dina Titus and two Republicans, Pennsylvania’s Brian Fitzpatrick and Michigan’s Dave Trott.

The measure, entered as H.R.4168, would amend federal law to regulate “reciprocating” bump stocks “or any other devices designed to accelerate substantially the rate of fire of a semiautomatic weapon” through the National Firearms Act, treating them in the same manner as machine guns. Currently bump stocks are treated as accessories, allowing to be sold over the counter, on the internet, and by mail order in most states. California and New York prohibit the devices.

The resulting move could see the National Firearm Registration and Transfer Record opened for the first time to individuals since 1968. At the time, a 30-day amnesty period allowed gun owners to register then-illegal items in their collection. Likewise, retailers who sell targeted devices in the future would have to be Class III FFLs.

Notably, of the several bump stock bans still proposed in Congress, none are structured to allow current owners to keep their existing devices.

The push to add them to the NFA is endorsed by an association of current and former Bureau of Alcohol, Tobacco, Firearms and Explosives employees who argue such a move is needed to regulate the devices.

“As former law enforcement professionals, it is difficult to swallow the fact that the horror of this event was exacerbated by the bump stock, a device engineered to avoid regulation under federal law — but unfortunately, it is not surprising,” said Michael Bouchard, president of the ATF Association.