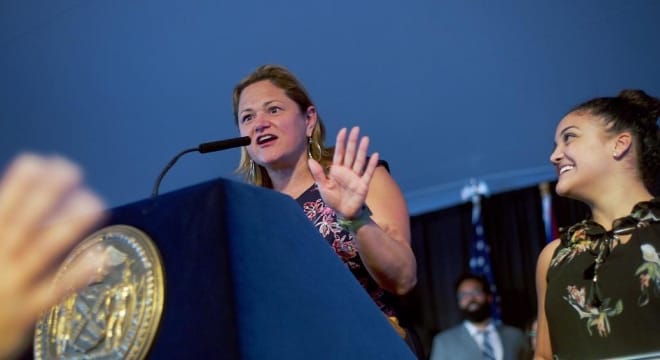 The New York City Council on Tuesday approved a measure requiring the Police Department to warn applicants for firearm licenses and permits about suicide and death.

The bill, Intro 1724, would instruct the NYPD to provide applicants for firearm licenses and permits with a mandatory health warning on death and suicide risks. It passed 44-2 and heads to Mayor Bill de Blasio’s desk for signature.

NYC Council Speaker Melissa Mark-Viverito prefaced the body’s vote this week by equating it to the Surgeon General’s warning on cigarettes, hoping to ignite “a national movement” on the risks of gun ownership.

“A majority of Americans believe that having a gun in their home makes them safer, and numerous studies have conclusively demonstrated the opposite is true,” Mark-Viverito said. “The risk of suicide is higher in homes with guns. The risk of homicide is higher in homes where an abusive partner owns a gun and occupants are significantly more likely to die from accidental gunshot injuries in homes with guns.”

A fiscal impact analysis found the move wouldn’t cost the city anything as existing resources would be used to implement the legislation.

The measure passed the Council’s Public Safety Committee on Monday 6-1 with the committee chair, Councilwoman Vanessa Gibson, saying, “these gun warnings are the first step to changing the public’s conversation.”

NYPD legislative affairs director Oleg Chernyavsky told the committee earlier this month that the agency supports the proposal. He said the agency currently provides applicants with a pamphlet on state and local gun laws, including safe storage requirements, but doesn’t issue a warning on potential risks from the misuse of firearms.

The city of 8.5 million has just over 41,000 people licensed to possess firearms — with just 2,500 of those having very rare carry permits — and has among the strongest licensing requirements in the nation, The New York Times reported.

If signed by de Blasio into law, New York City would not be the first to implement mandatory gun warnings.

California has required warnings on firearms certificates and instructional pamphlets since 1993. Current law mandates packaging of any firearm to carry a statement warning that children are attracted to and can operate firearms and that if a child obtains and uses one, the owner could be subject to fines and imprisonment.

Last year, Washington Gov. Jay Inslee signed a measure that aims to help drop the number of suicides through a partnership of pharmacies and gun dealers to develop materials and training to spot signs of someone at peril from what they term the “nation’s most preventable form of death” in a state where the suicide rate is 14 percent higher than the national average. Among the mandates is that the state Department of Fish and Wildlife update their firearm law pamphlets with suicide prevention information.