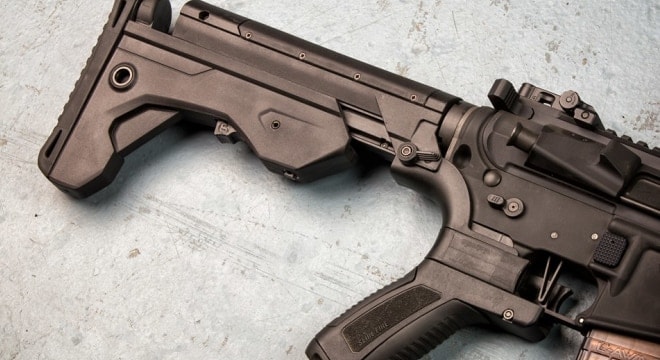 Slide Fire stresses that, while all items are new production and tested at their facility, they may not ship in retail packaging and selection is limited. (Photo: Slide Fire)

The Texas-based manufacturer of a contentious aftermarket accessory that uses recoil impulse to help mimic full-auto fire has announced they are again accepting orders.

Flooded by demand in the aftermath of federal, state and local calls for bans on the devices after the Las Vegas shooting in which they were utilized, Slide Fire last month placed a temporary hold on taking new orders in order to accommodate their backorder. Now, they have announced that effective Wednesday they will resume limited sales.

“However, we have not yet reached adequate inventory levels to offer sales of all products,” clarified the company in a release, noting they will initially be offering their SSAR-15 OGR stocks in both right and left-hand models and SSAR-15 SBS models in right-hand only.

Slide Fire stresses that, while all items are new production and tested at their facility, they may not ship in retail packaging.

Approved by the Bureau of Alcohol, Tobacco, Firearms, and Explosives in 2010, the bump fire stock marketed by Slide Fire is pitched to increase firearms accessibility for those with limited mobility among other uses. The company patented their stocks in 2000 and since then has defended their niche in the marketplace, forcing competitor Bump Fire Systems out of business last year after a lengthy court battle.

The company is headquartered in the tiny central Texas town of Moran. The 270-strong community told the New York Times last month they are standing behind the company and its founder, Air Force veteran Jeremiah Cottle.

Slide Fire is currently facing a lawsuit filed by the Brady Center and some survivors of the Route 91 Harvest shooting in a Nevada court.