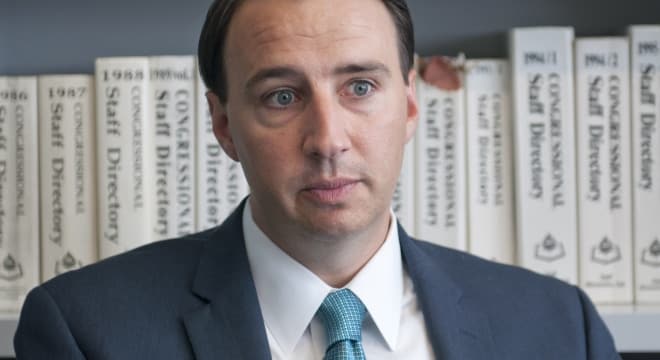 Pennsylvania Republican Ryan Costello is sponsoring a bill that would encourage states to add more of their domestic violence abusers to the federal database of prohibited firearms possessors. (Photo: VISTA)

The measure, H.R.4183, was introduced Wednesday by Pennsylvania Republican Ryan Costello and New York Democrat Kathleen Rice. It aims to create incentives for states to provide complete domestic violence records to federal background check databases while penalizing those that do not.

“Our background check system is only as strong as it is comprehensive, and this legislation will help keep our communities safe by making sure officials have the tools and resources they need to report the information that makes these records complete,” Costello said in a statement.

The language of the bill — without requiring states to submit complete records of abusers which in turn would be listed as prohibited firearms possessors — would make jurisdictions that did not forward all their information ineligible to participate in the Department of Justice’s National Criminal History Improvement Program. Designed to improve local criminal history record systems, the NCHIP program awarded $33.9 million in grants to states and territories last year.

As a carrot to balance the proverbial stick, the bill would also allow participating states to receive more funding through the NICS Act Record Improvement Program, which helps offset local efforts for the transmittal of records to federal systems. Established in 2008, the program awarded more than $15 million in grants in 2016.

In a statement from Costello’s office, the lawmaker cites a government study that 6,700 firearms were transferred to domestic abusers who should have been marked as prohibited possessors in the past decade due to incomplete records reporting.

Of the nearly 17 million view active prohibitive records in NICS as of September, 152,000 are for misdemeanor crimes of domestic violence.

The measure has the support of a host of major domestic violence prevention organizations, as well as the Giffords gun control group.

“Domestic violence and guns are a lethal combination, yet far too many domestic abusers are still able to easily access firearms,” said Giffords founder, former U.S. Rep. Gabrielle Giffords. “Our elected leaders must step up and close loopholes in our laws to protect women and families and make our communities safer.”

The bill has been referred to the House Committee on the Judiciary.