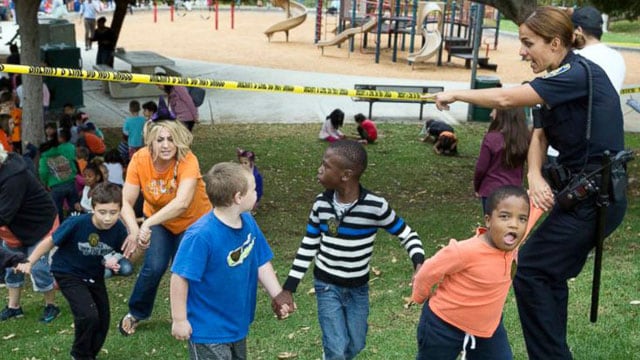 Students are taken to safety as their school went on lockdown during a hostage situation Tuesday morning. (Photo: ABC)

Riverside Police Public Information Officer Ryan Railsback said the teacher is safe, but they do not have a motive for the suspect’s actions yet. “We’re going to let our detectives figure that out,” he said, adding, “Just like every officer involved shooting we had or every critical incident, they will conduct their investigation.”

Riverside police received a 911 call around 11 am regarding “a disturbance and altercation involving a parent” at Castleview Elementary School, according to a statement. There, officers found Luvelle Kennon, 27, holding hostage Linda Montgomery, 70, who has taught at the school for several decades. It’s unclear if Kennon’s daughter was in Montgomery’s class, local media reported.

Stephanie Zolfaghari, the principal’s secretary, told The Press-Enterprise that Kennon was visibly angry when he entered the office. “When I first saw him I knew it was probably the most upset parent I’ve had,” she said, adding, “Somehow I knew he would try to force his way in,” which he did, despite Zolfaghari’s efforts to stall him. Zolfaghari immediately called the police and placed the school on lockdown, but Kennon, who was carrying multiple backpacks, was still able to get to Montgomery’s classroom.

As officers were en route, additional calls were received stating the incident escalated with Kennon barricaded inside a classroom and holding Montgomery hostage. A substitute teacher was left with facial injuries, including a broken nose, when he tried to stop Kennon.

Multiple agencies responded to the scene, including SWAT, the bomb squad, and emergency negotiators. Students and staff were evacuated to a nearby park for safety and to reunite students with their parents.

Hostage negotiators were able to make contact with Kennon – off and on – throughout the standoff. However, during this time, no communications were made with Montgomery, and her safety and well-being remained unknown.

After more than six hours, the decision was made for SWAT to breach the classroom. During this time, an officer-involved shooting occurred and Kennon was struck by gunfire. He was rushed to a local hospital, where he died.

Montgomery was also taken to the hospital and treated for minor injuries. Railsback said the incident was “very traumatic” for her and they are “trying to give her a little space to recover mentally” before they press about details of the incident.

Authorities recovered the backpacks carried by Kennon, but did not disclose their contents and it’s unclear if Kennon was armed during the standoff. Railsback did confirm that the investigation is ongoing and, although details remain rather scarce at this time, more information is expected to be released.

“I want to begin by thanking the Riverside Police and Fire Departments, the City of Riverside, and all RUSD staff and administrators who have helped bring this situation to an end,” said Riverside Unified School District Superintendent Dr. David Hansen. “Safety is our number one priority, and in this case because of the quick work and collaboration of our first responders and RUSD staff, all students, and now all staff, are accounted for and safe.”

The school will remain closed for the remainder of the week, and crisis counselors will be available for students and staff.