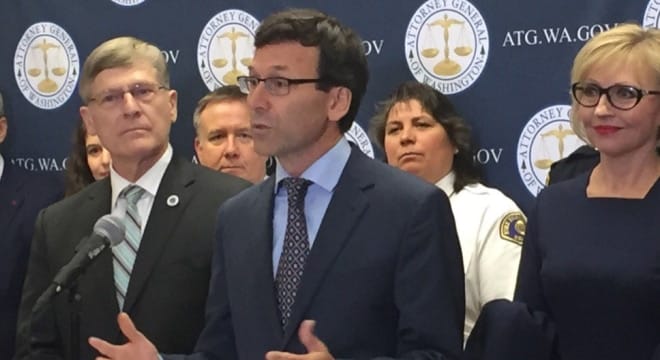 Washington Attorney General Bob Ferguson told local media he is up for a renewed push for a prohibition on “assault weapons and high-capacity magazines.”

Ferguson, who unsuccessfully backed a similar move in 2016, told The Daily World last week that he would like to see the ban legislation succeed. “We are bringing back legislation that will outlaw the sale of assault rifles and high capacity magazines,” he said. “This would limit magazine size to 10 rounds maximum.”

Citing a “duty to protect the public” last year, Ferguson requested legislation that largely mirrored California’s long-standing assault weapon ban enacted in 1989 and enhanced several times over the years. The resulting bills, SB 5050 and HB 3087, never made it out of committee.

To reinforce his point, Ferguson issued a 26-page white paper last October urging changes that Washington policymakers could consider to change firearms access in the state. Among the increased regulations advocated were several steps that approximated the state’s Extreme Risk Protective Orders, which were adopted by a voter referendum in the general election.

Besides the reach for an assault weapon ban and magazine cap, Ferguson said last week he would like to see movement on a bump stock ban — which Gov. Jay Inslee supports — as well as to raise the minimum age for gun purchases in the state to 21.