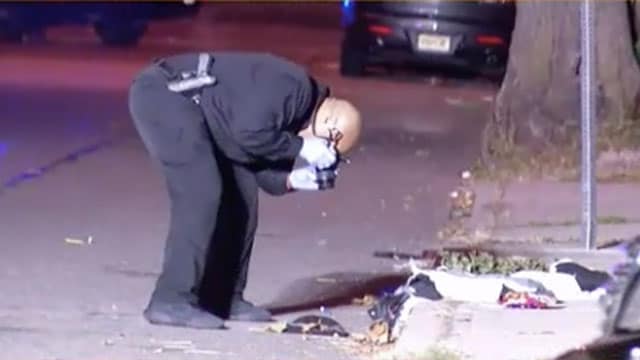 Authorities examine evidence at the scene of an attempted robbery that left two dead. (Photo: NJ.com)

An off-duty Jersey City police officer shot and killed two men trying to rob him in Newark on Sunday night, according to reports.

Authorities identified the victim only as a detective and member of a DEA Task Force, and the suspects as Dante Holden, 19, and Tymyr Wilson, 21, both of East Orange, according to reports.

The two suspect confronted the detective, accompanied by a friend and two children, around 11:30 pm with guns and announced a robbery. Although details about any struggle have not been disclosed, one of the suspects attempted to shoot the officer, but his gun jammed. The officer then fired his own weapon, striking both Holden and Wilson.

According to Acting Essex County Prosecutor Robert Laurino, both suspects died at the scene. The officer was taken to the hospital and treated for trauma, local media reports.

“We are thankful that our detective, who was a victim of an attempted armed robbery, is OK and want to thank the Newark Police Department and the Essex County Prosecutor for their assistance in this ongoing investigation,” said Jersey City spokeswoman Jennifer Morrill.

The incident remains under investigation, but no charges have been filed against the detective at this time. Once the investigation is completed, however, the case will be turned over to an Essex County grand jury, who will determine whether charges are warranted.