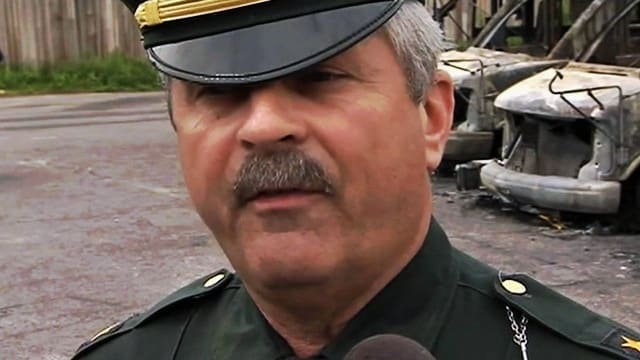 A retired police chief in New Jersey was arrested and charged Wednesday with a hate crime and the violation of a black man’s civil rights after he allegedly slammed the man’s head into a doorjamb during an arrest.

Former Bordentown Township Police Chief Frank Nucera, 60, had a history of racial animus prior to the violent arrest last fall, according to a criminal complaint unsealed Wednesday.

“(Nucera) has a significant history of making racist comments concerning African Americans, to whom he frequently referred as ‘niggers,’ ‘nigs,’ ‘moulinyans’ (an Italian-derived racial slur for African Americans) and ‘moulies,’ wrote FBI Special Agent Vernon Addison in the complaint.

According to prosecutors, Bordentown Township officers were called to a hotel on Sept. 1, 2016 after two black teenagers reportedly stayed there without paying for the room. Both teens, an 18-year-old man and a 16-year-old girl, resisted arrest, prompting officers to call for back up. That’s when then-Chief Nucera arrived.

Officers eventually restrained the teens, and as the 18-year-old was being escorted out of the hotel, Nucera approached him from behind and slammed his head into a metal doorjamb. Prosecutors say a subordinate officer surreptitiously recorded Nucera after that incident.

In the recording, the chief repeatedly used racial slurs to describe the teens, saying “[t]hese fucking people” should “[s]tay the fuck out of Bordentown,” adding that it “would have been nice” if the officers could have used a police dog during the arrest.

“I’m fucking tired of them man,” Nucera said in the recording. “I’ll tell you what, it’s gonna get to the point where I could shoot one of these motherfuckers.”

“And that nigger bitch lady, she almost got it,” he said, referring to the 16-year-old’s aunt.

“That dog, that dog will stop anything right then and there [makes dog noises]. I’m telling you. You’d have seen two fucking niggers stop dead in their tracks. I love that when they do that. I just love that,” he said.

In December 2016, Nucera allegedly defended his use of force against the teenager, saying in a recorded conversation that it was justified because officers had to respond to the call ‘“cause of six unruly fucking niggers.”

“The defendant harbored an intense racial animosity towards African Americans,” said Acting U.S. Attorney William Fitzpatrick in a press release. “That senseless hatred led to the unlawful assault of a handcuffed and defenseless prisoner.”

“The conduct alleged is a shocking breach of the duty of every police officer to provide equal justice under the law and never to mistreat a person in custody,” Fitzpatrick continued. “As a result, the former chief of police is now a charged federal criminal defendant.”

Those harbored feelings of racial animosity go back several years. According to the criminal complaint, when Nucera suspected that a black man had slashed the tires of a police vehicle, he went on a racist rant to a subordinate officer in November 2015.

“I wish that nigger would come back from Trenton and give me a reason to put my hands on him, I’m tired of ‘em,” Nucera told the officer. “These niggers are like ISIS, they have no value. They should line them all up and mow ‘em down. I’d like to be on the firing squad, I could do it. I used to think about if I could shoot someone or not, I could do it, I’m tired of it.”

In another instance, Nucera ordered officers in his department to bring police dogs to high school basketball games in an attempt to intimidate black patrons. In April 2016, during an audio recorded conversation with a subordinate officer, Nucera told the officer to walk a police dog through an apartment complex, saying “let these fucking moulies see him. Let ‘em see him. I don’t care.”

The subordinate officer had recorded Nucera over the course of about a year “because he became increasingly alarmed by the defendant’s racist remarks and hostility towards African Americans,” according to the criminal complaint.

In May 2014, Nucera made headlines when he was shot in the leg with his own firearm inside a municipal building during some kind of struggle with a juvenile.

He’s being charged with one hate crime count, and one count of deprivation of rights under color of law for the September 2016 excessive force incident. Each count carries a maximum penalty of 10 years in prison and a $250,000 fine. He’s been released on bond and ordered to surrender all firearms and firearm permits to the FBI.