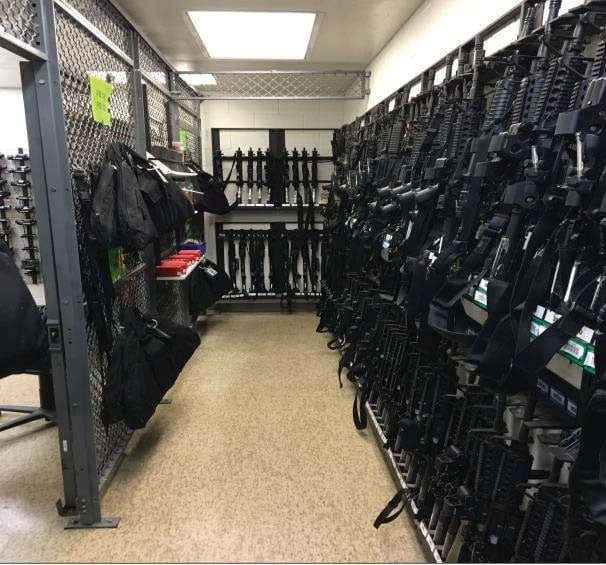 A Department of Homeland Security gun vault. According to a recent report, 228 firearms went missing over a three-year period including 103 from CBP, 47 from ICE and 28 from TSA. (Photo: DHS)

A report issued last week by the Department of Homeland Security’s Office of Inspector General details that hundreds of guns and thousands of badges have gone missing in recent years.

The 27-page report by the DHS watchdog discloses that between 2014 and 2016, personnel of the nation’s largest law enforcement agency lost sensitive assets including 228 firearms, 1,889 badges, and 25 secure immigration stamps.

With over 250,000 guns in the inventory of components as diverse as Customs and Border Protection, ICE, the Coast Guard and the Secret Service, the report found that in many cases the firearms that are unaccounted for came after officers either disregarded policy or used poor judgment.

In one case, two ICE officers left their guns unattended in backpacks on a Puerto Rico beach only to come back and find them gone. In another, a vacationing ICE agent had his overnight hotel room guest vanish with his belongings — to include his badge and gun. A third incident involved a CBP officer whose gun came up missing after he left his firearm at a friend’s house for two days.

The OIG found that of the 65 cases in which guns were lost due to poor safeguarding by those trusted with them, 22 officers did not receive any disciplinary action while nine who did only received an oral counseling. Further, none were given remedial training after the fact.

“Without proper disciplinary action and training, officers may misinterpret poor safeguarding as acceptable behavior and these practices will go uncorrected,” the report says. “The Department has a responsibility to oversee the program and take corrective action to ensure compliance with safeguarding requirements.”

Inspectors also found that, in some cases, sensitive items fell through the cracks when it came to inventory. During an audit of a CBP regional armory, 208 firearms could not initially be located though they were later accounted for within two weeks. At a Transportation Security Administration office, 11 guns were found in storage but didn’t show up on the location’s inventory although they had been there for months.

The OIG recommended that DHS ramp up its property asset management program when it comes to training and set guidelines for the use of safety locking devices. In addition, they stressed the need for re-training property custodians on recordkeeping guidelines.

The report comes as a follow-up to a 2010 review that cataloged 289 firearms as lost between 2006 and 2008 and resulted in several policy changes in how the various agencies of the Department handle their controlled items. That report found that of the 179 guns lost due to the failure of the agent or officer to properly secure the weapon, “all 179 losses may have been prevented had the officers properly safeguarded their firearms.”

The Department of Homeland Security is currently a defendant in a lawsuit relating to the death of California artist Antonio Ramos. The Oakland muralist was killed with a Glock 26 9mm handgun issued to an ICE Enforcement and Removal Operations officer visiting the city, and the suit alleges the officer acted negligently by failing to secure the gun as left in plain view in a rental car parked in a high-crime area known for car break-ins.