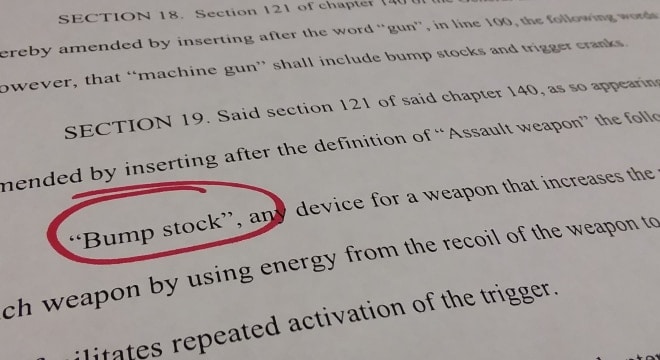 The bill would add definitions of bump stocks and trigger cranks to Massachusetts state law, directing a ban on both (Photo: Chris Eger/Guns.com)

A joint conference committee of the Commonwealth’s legislature on Thursday forwarded a ban on bump stocks and trigger cranks to Republican Gov. Charlie Baker.

The language, part of H.4008, an appropriation bill, is a compromise measure which aims to prohibit the devices while toning down more sweeping language in an earlier proposal that intended to ban any device able to increase the rate of fire on semi-automatic guns.

State Sen. Barbara L’Italien said the bill now headed to Baker “does a great job getting bump stocks and trigger cranks out of the wrong hands for good.”

The measure adds definitions to state law of “Bump stock” and “Trigger Crank,” regulating each in turn. Further, where those found guilty of possession of such devices would face between three and 20 years in prison under the House proposal, the Senate measure would allow for penalties to run from 18 months to life in prison.

Under the proposed guidelines, a bump stock would be defined as a device that increases a gun’s rate of fire by using the recoil of the firearm “to generate a reciprocating action that facilitates repeated activation of the trigger.” Trigger cranks would be classified as a device attached to a firearm that activates the trigger using a lever turned “in a circular motion,” with exceptions for guns such as Gatling guns which are specifically designed to use such a crank.

The Gun Owners’ Action League, the state’s National Rifle Association affiliate, said they were disappointed in the legislative process behind the measure and lamented the proposal did not include a pathway to legal ownership of devices already in circulation.

The NRA, which is urging that Baker issue a line item veto on the gun language in the bill, cautioned that federal regulators are reviewing previous determinations on bump-fire stocks and that “Any legislation in this area should wait for this review to be complete so an accurate assessment of the applicable federal law is available.”

Baker last month said he would sign anti-bump stock legislation “tomorrow” if it were presented to him.

Should Baker hold true to his previous statement, it would fall to state Attorney General Maura Healey to enforce the prohibition. Healey last week led a call from 33 state and territorial attorneys general to Congress to ban the devices, citing their use in the Las Vegas Route 91 Harvest festival shooting that left 58 dead.