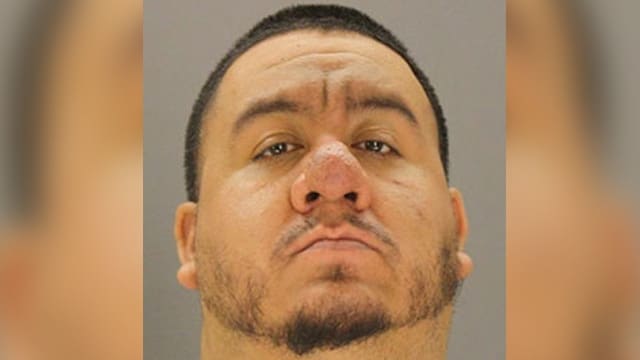 A Texas man was sentenced Thursday to more than 47 years in federal prison after he and his cousin were convicted of firing at least 42 rounds at federal officers in November 2015, the Department of Justice said in an announcement.

Victor Manuel Solorzano, 32, of Dallas, was convicted earlier this year of one count of possession with intent to distribute methamphetamine, two counts of assault of a federal officer, and two counts of using, carrying, brandishing and discharging a firearm during and in relation to a crime of violence.

As part of a methamphetamine trafficking investigation, Department of Homeland Security officers went to Solorzano’s home on Nov. 19, 2015 to attach a tracking device to his vehicle. That’s when Solorzano confronted one of the officers in the street and opened fire with an AR-15 pistol, striking him in the hand and foot. Solorzano’s cousin, Edgar Solorzano, who lived across the street, also came outside and started firing with an AK-47 pistol.

The officer “ran for his life,” according to prosecutors, and got into the passenger side of a waiting pickup truck with another federal officer inside. Victor and Edgar continued firing at the officers as they sped away. They did not return fire, and the officer who attached the court-ordered tracking device to the vehicle was shot four times and survived.

“Miraculously, the officers were not severely injured or killed,” says the Justice Department press release. “In total, the Solorzano cousins fired at least 42 gunshots at the federal officers on a residential street, and their turbulent gunfire even struck other vehicles and a home situated on the street.”

After the shooting, the cousins hid the weapons — one of them in Edgar’s attic and the other in a neighbor’s yard. When authorities searched his home, they recovered both weapons. They also found more than eight grams of methamphetamine in Edgar’s bedroom, drug distribution paraphernalia, and several guns and ammunition. A search of Victor’s home produced one to two pounds of meth in a bag hidden in his closet. Authorities also found guns and cash in Victor’s residence.

“This shocking example of cold-blooded violence in our neighborhoods and against our law enforcement officers is exactly why we will never stop fighting the fight,” said U.S. Attorney John Parker. “Those who traffic in drugs bring nothing but misery and death to our communities and they must be stopped.”

According to court documents, the Solorzano cousins forfeited 22 firearms between them. Edgar Solorzano, 24, pleaded guilty in April to several charges and is set to be sentenced later this month.