Obama: reduce 'weaponry in our midst' in aftermath of Texas church shooting 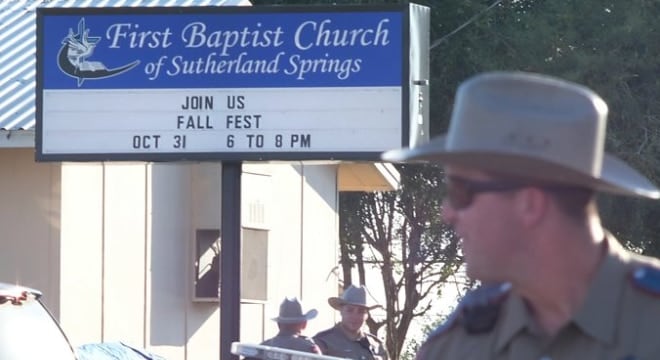 The incident, which left at least 20 dead, drew calls for action on gun control from President Obama, Democrats on Capitol Hill, and gun control groups. (Photo: Reuters via BBC)

The incident, which left at least 20 dead in a small community outside of San Antonio, drew calls for thoughts and prayers for the victims from President Trump, Texas Gov. Greg Abbott, Texas Attorney General Ken Paxton, and U.S. Sens. John Cornyn, and Ted Cruz.

On the other side of the political spectrum, former President Obama said on social media that he grieved with the families in Sutherland Springs, then followed up with a call for action.

“May God also grant all of us the wisdom to ask what concrete steps we can take to reduce the violence and weaponry in our midst,” Obama said.

In a longer statement followed up by a series of tweets, U.S. Sen. Chris Murphy, a Connecticut Democrat currently sponsoring a series of gun control bills in Washington, railed against the gun industry while urging political change on Capitol Hill.

“Can you sleep tonight, colleagues, when the price of gun lobby goodwill is this — blood soaked church and school floors, city streets,” said Murphy, who introduced a bill expanding background checks to all gun purchases in the weeks after last month’s Las Vegas shooting. A similar bill he brought in the wake of the Pulse nightclub shooting in Orlando last summer found little support on the Senate floor.

“We have a solemn obligation to the victims of Sutherland Springs, Las Vegas, Orlando, Newtown and the many tragic shootings that occur each day to respond not only with prayer and unwavering love, but with action,” said the California Democrat. “Much more needs to be done in the Congress to ensure that no other family is forced to endure such an unimaginable tragedy.”

Pelosi last month wrote Republican Speaker Paul Ryan, recommending he move to allow a Select Committee on Gun Violence with a mandate to study the issue and make recommendations to Congress. She is urging a vote to pass the King-Thompson Act, which seeks the type of expanded background checks advocated by Murphy in the Senate.

Among national gun control groups, the Brady Center, Giffords, and Moms Demand Action all issued statements contending overall that gun violence is preventable, laying the problem at the foot of Second Amendment groups.

“It is time for every single American to get off the sidelines and demand our lawmakers reject the NRA, which has far too much influence over our gun laws,” said Shannon Watts, founder of Moms Demand Action, in a statement.