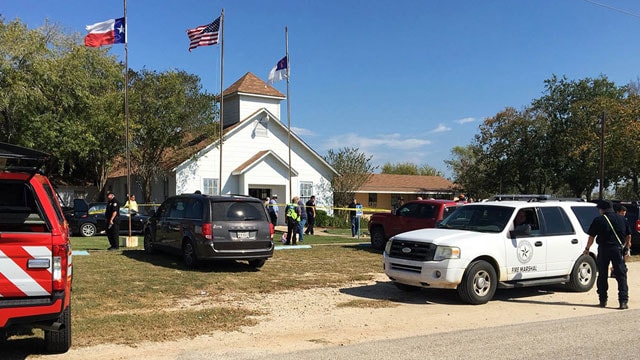 Texas Gov. Greg Abbott ordered flags to be flown at half staff through Thursday in honor of those who died in the “horrific shooting.” (Photo: KSAT)

Twenty-six people were killed and another 20 injured during a Sunday morning church service in Sutherland Springs, Texas, in what is being described as the largest mass shooting in the state’s history.

Freeman Martin, regional director with the Texas Department of Public Safety, said 23 people were found dead inside the church, two others died outside of the church, and one died after being transported to the hospital.

Martin said the shooter, Devin Patrick Kelley, 26, was dressed in “tactical-type gear” and wearing a ballistic vest when he parked his SUV at a Valero gas station near the First Baptist Church around 11:20 a.m. Kelley armed himself with an “assault-type rifle,” walked across the street and began firing as he approached the church. Kelley then moved to the right side of the building and eventually inside the church, shooting the entire time.

At some point, a resident who lived near the church realized what was happening, grabbed his own rifle, and engaged Kelley. Authorities could not immediately confirm whether the armed resident struck Kelley, but did say Kelley dropped his rifle and ran from the church.

Kelley fled from the scene in his SUV, but the armed resident, along with a second man, followed Kelley until he crashed about six miles from the church. According to local reports, the armed resident approached the vehicle, but Kelley never moved. The resident waited with his weapon trained on Kelley until police arrived, about five minutes later. Inside the SUV, authorities found Kelley dead. It’s unclear if Kelley died from a gunshot sustained by the armed resident or whether the gunshot wound was self-inflicted. Multiple weapons were recovered from the vehicle.

Authorities have not officially released the names of any of the victims, although some friends and family have identified them to local media. Authorities urged the media not to publish any names until the families have all been notified. Martin said the deceased victims range in age from 5 to 72 years old. He said the injuries of the surviving victims range from minor to “very severe.”

Martin said they have no motive for the shooting at this time, while Wilson County Sheriff Joe Tackett said there were no obvious signs that it was connected to terrorism. “There’s no reason for it,” Tackett said of the shooting, “But that’s the world we live in today.”

Multiple reports indicate Kelley was a former member of the United States Air Force before he was dishonorably discharged in 2014. Two years prior, he was court-martialed on charges of assaulting his wife and child, according to Ann Stefanek, a spokeswoman for the Air Force.

Martin assured that all available resources are working on the case and include local, state, and federal officials. At the end of the investigation, questions will be answered, he said.

“We don’t know if that number will rise or not, but we know that’s too many and this will be a long, suffering mourning for those in pain,” Gov. Greg Abbott said in a press conference Sunday afternoon.