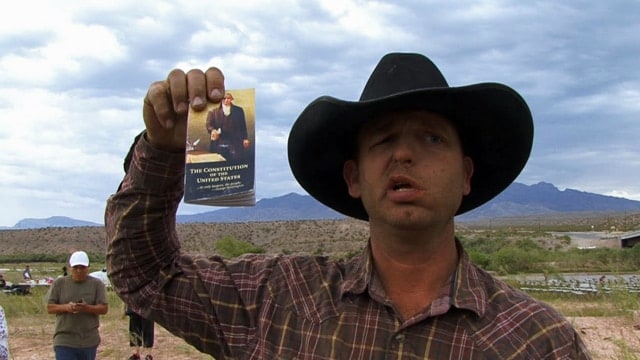 Ryan Bundy holds up a copy of the U.S. Constitution in April 2014. (Photo: YouTube)

Just days before opening statements in the third “Battle of Bunkerville” trial this year, a national park ranger testified Friday that the FBI had a surveillance camera pointed at the Bundy Ranch back in 2014.

The revelation came during a pretrial hearing Friday in Las Vegas, in which Ryan Bundy, who is representing himself, questioned National Park Service ranger Mary Hinson, according to The Oregonian.

Ryan Bundy is on trial with his brother, Ammon, and his father, Cliven, as well as a fourth defendant, Ryan Payne. Opening statements kick off Tuesday and the trial is expected to last about four months.

The defendants face a slew of charges in connection with the nearly weeklong armed standoff that happened about 80 miles northeast of Las Vegas in April 2014. Bureau of Land Management agents came to Cliven Bundy’s ranch to round up his cattle in lieu of $1 million in backed grazing fees that Bundy had refused to pay over two decades. The federal agents eventually retreated, and no shots were fired.

In court on Friday, Hinson told Ryan Bundy the FBI operated the camera that was perched on a hill overlooking the Bundy Ranch. She said she wasn’t sure if the feed had been recorded.

This isn’t the first time this has come up. Ryan Bundy filed a motion on Aug. 22 asking the court to compel the government to “produce discovery regarding photographic and laser equipment used to surveil the Bundy home and American People who peceably [sic] asembled [sic], between March 26, 2014 and April 12, 2014.”

Bundy wrote that he saw a “mysterious device” on a hill northeast of the Bundy Ranch. “The devise [sic] comprised of telephoto lens and camera type implement, and a visible laser pointing directly at the Bundy home,” he wrote in the motion. “The devise [sic] was mounted on a tripod, had an antenna, and was supported by an electric generator.”

“On Sunday April 6, 2017 I witnessed BLM service the devise [sic] above the Bundy home accompanied by a contingent of militarily armed personnel consisting of several vehicles, and several gunmen with assault rifles, who set up a perimeter around the devise [sic] while being serviced,” Bundy wrote.

“The presence of the device above the Bundy home and the military force accompanying it destroyed the semblance of security we accustomely [sic] enjoy,” Bundy continued. “A gut wrenching feeling of invasion ate at us, fear.”

Ultimately, the purpose of the motion was to obtain the make, model, characteristics and capabilities of the equipment that was used. In September, Nevada Acting U.S. Attorney Steven Myhre responded to the motion in writing, calling it “little more than a fantastical fishing expedition for evidence.”

“What was it picking up? I want to know,” Bundy said in court Friday, talking about the device. “The government’s response was mocking me.”

Hinson estimated the camera had been up for four days before someone destroyed it.

“Was it or not surveilling the Bundy home?” Bundy asked Hinson on Friday.

“Yes, we could see it,” Hinson replied.

“Was it taking audio recording?” Bundy asked. Hinson said she wasn’t sure.

Bundy said he believed there was more than one camera, but Hinson said she thought there was just the one.

Cliven Bundy’s lawyer, Bret O. Whipple, wants to find out if a recording of the live feed from the camera exists. “It’s just kind of outrageous,” he said. “How can you sit on this information for three and a half years?”

There were also conflicting statements Friday by federal officers over whether documents had been shredded at the incident command site in April 2014. One BLM agent said there was a “hurried” shredding of documents when officers heard the Bundys and their supporters were going to storm the federal trailers during the standoff. But other witnesses say there was no such shredding.

U.S. District Judge Gloria M. Navarro said there wasn’t enough information to suggest that whatever may or may not have been shredded would have helped the defendants.

“Just because a piece of paper or video exists doesn’t mean it’s discoverable,” she said. “It needs to have a particular type of value.”