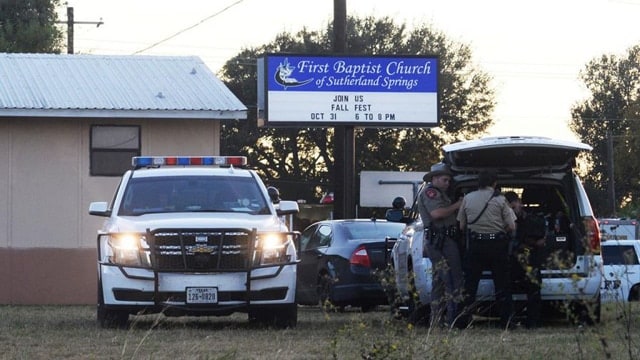 Top Air Force officials admitted wrongdoing Monday after it was revealed the agency didn’t submit Devin Patrick Kelley’s 2012 assault conviction to the FBI. Kelley’s criminal record would have barred him from legally buying the firearms used in Sunday’s attack at a church in Sutherland Springs, Texas, that left 26 dead and 20 wounded. (Photo: Fox News)

The Air Force acknowledged Monday it never submitted the Texas shooter’s criminal record to the FBI, according to a report from the Associated Press.

Air Force Secretary Heather Wilson and Chief of Staff Gen. David Goldfein have ordered the branch’s Office of Inspector General to review the circumstances surrounding why 26-year-old Devin Patrick Kelley’s 2012 conviction for domestic violence against his wife and stepson never made it into the federal background check system database, thus allowing him to buy the firearms used in Sunday’s attack.

Kelley shot himself in the head Sunday after he opened fire inside the First Baptist Church in Sutherland Springs, Texas, killing 26 and wounding 20 others. Investigators say an ongoing domestic dispute may have led him to the church where his mother-in-law sometimes attended service. Authorities confirmed Monday she had received threatening text messages from Kelley.

“We know there was conflict between the families and whether it was revenge or not, that would just be speculation,” said Freeman Martin, regional director with the Texas Department of Public Safety, during a press conference with reporters Monday evening. When pressed further, Martin said Kelley didn’t need to need to bring “15 loaded loaded magazines and an assault rifle to a church” just to kill his mother-in-law. “I think he came here with a purpose and a mission,” he added.

Kelley, a former airman, spent a year in confinement after he admitted to assaulting his wife and stepson while serving in Logistics Readiness at Holloman Air Force Base in New Mexico. He received a demotion in rank and a bad conduct discharge in 2014.

The Bureau of Alcohol, Tobacco, Firearms and Explosives traced two of Kelley’s four firearms to Colorado, while the other two came from dealers in Texas. CNN reports police found an Ruger AR-556 rifle outside the church where Kelley purportedly dropped it during a confrontation with an armed neighbor. Freeman said Monday the 15 magazines recovered from the scene were completely empty.