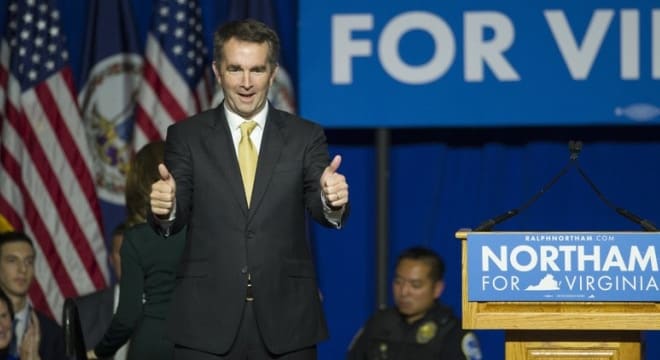 Backed by a coalition of gun control groups, Phil Murphy won his race in New Jersey while Lt. Gov. Ralph Northam came out ahead in Virginia’s gubernatorial race.

Murphy, who will replace Republican Gov. Chris Christie in the Garden State and has pledged to get “tough on gun violence,” beat out his Republican rival, Lt. Gov. Kim Guadagno. In Virginia, Northam, who had President Obama talk gun politics on his behalf, bested Republican Ed Gillespie in a narrow finish.

“Make no mistake: Gun violence prevention was on the ballot today and, despite the NRA spending millions, voters in Virginia and New Jersey rejected the gun lobby’s agenda and voted for gun safety,” said John Feinblatt, president of Everytown, which invested $1.4 million in Virginia races alone this year. Feinblatt went on to say that heading into 2018, “gun safety will be a defining issue of the midterm elections.”

Murphy, who retired from a 23-year career at Goldman Sachs before moving on to high-ranking positions in the Democrat party and a stint as Obama’s ambassador to Germany, has gone on record as ready to sign every piece of gun control legislation that Christie has vetoed in the past eight years. Murphy has also advocated a special tax on gun sales, said he would order the state attorney general to step up enforcement of New Jersey’s gun laws and require gun registration linked to expanded background checks.

Northam, a Dem who has been the Commonwealth’s lieutenant governor since 2014, has said he would move to reinstate Virginia’s past one-handgun-a-month policy and is in favor of more regulation on semi-auto firearms.

“Governor-elect Northam will stand up to the gun lobby’s dangerous agenda,” said former U.S. Rep. Gabby Giffords, through her gun control PAC. “He will push for solutions to the epidemic of gun violence that is tearing apart Virginia communities. We supported Governor-elect Northam for the same reason Virginia did. Because of his character and record as a gun safety advocate, and because he made his commitment to fighting gun violence a central part of his campaign.”

On the West Coast, control of the Washington state Senate flipped with the victory by Democrat Manka Dhingra in the 45th District over Republican Jinyoung Englund. This puts the state in the same club as Oregon and California with Dems controlling both the legislature and the governor’s office.

In the past, gun control legislation in the Evergreen State was often rebuffed by GOP lawmakers in Olympia. Dhingra was supported by the Giffords PAC, partnered with the Bloomberg-backed Alliance for Gun Responsibility, on a digital and direct mail campaign, touting her stance on gun control.

“Manka will join a legislature that is ready to pass solutions that will respect the rights of law-abiding gun owners while keeping weapons out of reach from violent felons, domestic abusers, and other dangerous individuals,” Giffords said.

Incumbent Boston Mayor Marty Walsh and New York Mayor Bill de Blasio both won four more years in office while Seattle chose Democrat Jenny Durkan over Republican Cary Moon in that city’s mayoral race. Walsh and de Blasio have backed numerous gun control proposals in their first term while Durkan, who was endorsed by several groups close to the issue, has argued lawmakers “should ban assault weapons, ‘bump stock,’ and high capacity magazines as well as impose safe storage requirements and presumed liability for any injury or death caused by failure to do so.”