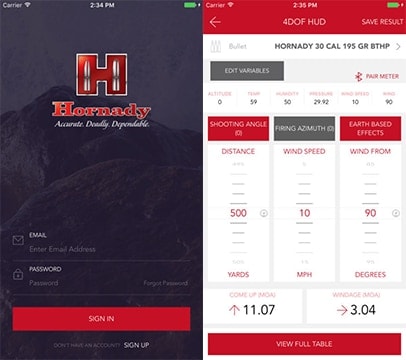 The app, available for free on both Apple and Android app stores, permits shooters to calculate trajectories within environments without wireless connectivity. Hornady introduced a similar concept in 2016 when in launched an online, website version featuring the 4DOF ballistic calculator.

Capable of calculating accurate trajectories at extreme ranges, the 4DOF calculator provides solutions based on projectile Drag Coefficient in addition to exact physical modeling of the projectile, its mass and aerodynamic properties.

Hornady also says the program was the first to make aerodynamic jump calculations publicly available. Aerodynamic jump refers to the vertical shift a bullet experiences as it comes in contact with crosswind. Using drag coefficients, projectile dynamics, aerodynamic jump and spin drift, the Hornady 4DOF ballistic calculator touts itself as the “most accurate commercial trajectory program available — even at extreme ranges.”

“Current ballistic calculators provide three degrees of freedom in their approach; windage, elevation and range, but treat the projectile as an inanimate lump flying through the air,” Dave Emary, Hornady Chief Ballistician, said in a press release.” This program incorporates the projectile’s movement in the standard 3 degrees but also adds its movement about its center of gravity and subsequent angle relative to its line of flight, which is the fourth degree of freedom.”

The 4DOF calculator coincides with pre-populated bullet files, including long range match and hunting style bullets. Though the calculator is fine-tuned with data regarding Hornady’s ELD-X, ELD Match, and BTHP bullets, the app also calculates for other ammunition makers such as Sierra, Berger and more.

The app is Bluetooth enabled and available for bother Apple and Android phones.