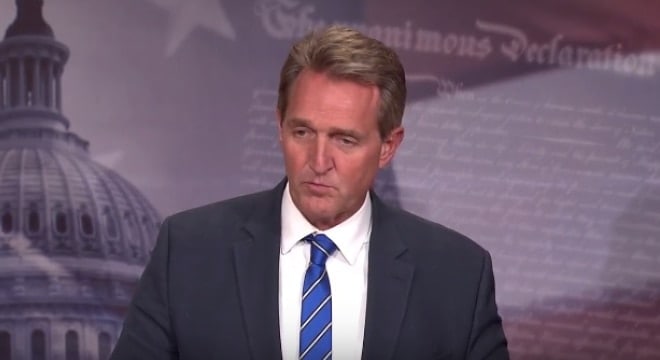 U.S. Sen. Jeff Flake has crafted a bill that would see the information of those convicted by military courts in domestic violence cases forwarded to the NICS system. (Photo: Flake’s office)

Following revelations that the man who killed 26 in a Texas church on Sunday should have been barred from purchasing a firearm, some in Congress want to act on background checks.

On Tuesday, U.S. Sens. Jeff Flake, R-Ariz. and Martin Heinrich, D-N.M., introduced a bipartisan proposal that forces the military to report misdemeanors of domestic violence to the National Instant Criminal Background Check System database used in vetting gun purchases. The killer in the First Baptist Church shooting in Sutherland Springs, Texas had been convicted of domestic violence charges while in the Air Force in 2012 but the branch did not forward his disqualifying information to NICS.

“It appears this loophole allowed a man who was clearly unfit to purchase a firearm to do so at the cost of 26 innocent lives,” Flake said in a statement. “This bill will ensure that a situation like this will not happen again and that anyone, anywhere convicted of domestic violence is kept from legally purchasing a gun.”

The measure proposed by Flake would require the military to forward information of those convicted under the Uniform Code of Military Justice on domestic abuse charges to NICS within three days of the end of the case. Yearly reports to Congress would be required from each service’s head and the Secretary of Defense on the progress of the reporting.

According to figures by the Federal Bureau of Investigation, which administers NICS, since 2007, only one case of a misdemeanor crime of domestic violence conviction has been reported by the military — coming from the Navy.

Besides Flake’s bill, Texas Republican John Cornyn says he is working on a bill to incentivize federal agencies, including the military, to step up reporting to NICS.

Like Flake, Cornyn cited this week’s violence in Sutherland while referencing his legislation, noting that the killer was court-martialed by the Air Force and convicted of serious domestic abuse, fracturing the skull of his stepson.

“This critically important information from the suspect’s criminal history was not uploaded into the relevant background check databases, even though a federal law clearly requires that it be done,” said Cornyn. “Because there was no record of it, he was able to lie his way into getting these firearms.”

The other half of the Lone Star State’s delegation to the Senate, Ted Cruz, told Fox News Channel’s “Fox News @ Night,” that Democrats filibustered legislation he proposed in 2013 that would have, in part, required federal agencies and the military to report convictions to the NICS database.