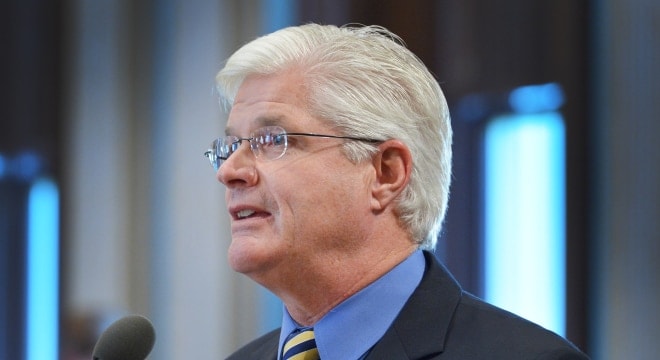 Lawmakers in The Wolverine State on Wednesday approved bills to allow concealed carry in schools, protect the gun rights of foster parents and allow teenagers to get carry permits.

The five-pack of bills all passed in Republican-heavy votes with the trio of proposals affecting campus carry — Senate Bills 584, 585, and 586– passing 25-12 while the other two measures, SB 366 allowing those age 18-20 to obtain a provisional concealed carry permit and SB 527 on foster parents went 26-11.

Structured to end the allowance for concealed pistol license holders in Michigan to carry openly on school campuses, which has proved to be a sore spot on occasion, the carry bills would instead shift to codify the right for CPL holders to carry concealed in those same areas.

“This legislation upholds the Constitution, protects the rights of CPL holders and reduces potential disruptions in pistol-free zones,” said the bill’s sponsor, state Sen. Mike Shirkey, R-Clarklake. “Since these zones were established almost 20 years ago, the courts have ruled that CPL holders can legally open-carry weapons but not carry concealed weapons.”

The change would enable CPL holders to apply for an exemption to the gun zones that currently bar concealed carry inside areas such as schools, day cares, bars, and hospitals provided they receive extra training. A similar proposal was floated in 2015.

Gun control advocates think the potential expansion would be dangerous. “As parents, we’re outraged that lawmakers are even considering gutting common-sense laws that protect our children and their school communities,” said Emily Durbin with Moms Demand Action. “The gun lobby may be pressuring lawmakers, but we’re paying attention, too, and we’ll do all we can to make sure the legislature rejects these reckless proposals.”

State Sen. Tom Casperson’s measure would change the current practice of the Michigan Department of Health and Human Services requiring all firearms legally possessed in foster homes be locked in a gun case or stored with a trigger-lock separate from ammunition.

“Adopting a child does not require you to give up your constitutionally guaranteed rights,” said Schuitmaker, R-Lawton. “Thousands of families across Michigan have figured out how to safely possess firearms in the privacy of their own homes without the government telling them how to do it.”

According to MDHHS, approximately 13,000 Michigan children are in foster care, but the agency is mired in a federal lawsuit after two Michigan couples who wanted to adopt were told they would have to give up their gun rights.

Adults under the age of 21 would be able to apply for a provisional CPL under legislation sponsored by state Sen. Wayne Schmidt.

“This is a responsible bill that will require 18- to 20-year-olds to abide by the current training and background requirements for obtaining a Concealed Pistol License,” said Schmidt, R-Traverse City. “It will make sure younger people are ready to conceal carry, as they are currently allowed by law to possess and open carry a firearm.”

Schmidt says his bill was modeled after a West Virginia law and, if approved, Michigan would join eight other states with such a provision.

All five bills are headed to the state House for further consideration.