As reported in the above video from KTVB, Colby Patchin with Boise Pottery ended up with a bunch of recycled building materials in the form of 400 empty anti-tank mine shipping crates after demolishing the old Garden City Furniture location in town.

“I got a text from my contractor saying ‘Look what we found inside your building when we were doing the demo,'” Patchin said.

The crates, for M1A1 mines, were produced at the Elwood Ordnance Plant in Joliet, Illinois over a three-month period in 1943. 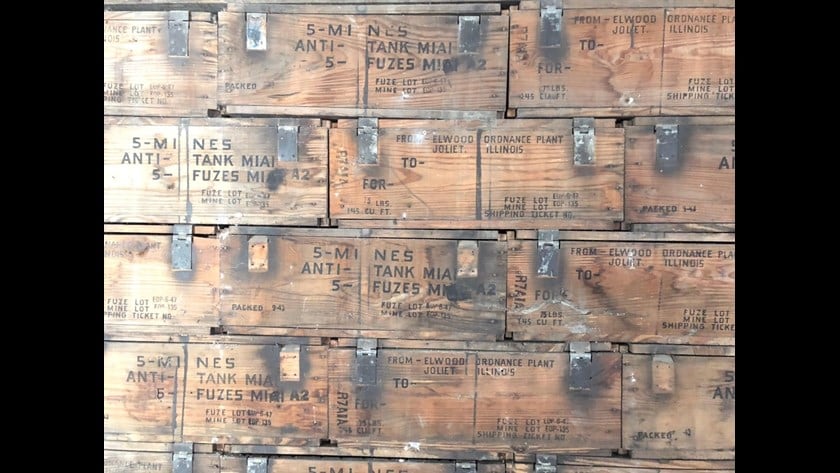 While Patchin says there were no mines or fuzes inside the boxes, he did find vintage instructions for their use. Designed to carry a 6-pound explosive charge, each M1A1 was capable of knocking the tread off a tank or demolishing a light-skinned vehicle such as a truck.

According to the USDA Forest Service, during the war the Elwood plant was considered among the “largest, most sophisticated munitions plants in the world,” and loaded, “over 926 million bombs, shells, mines, detonators, fuzes, and boosters,” during the conflict.

While some of the crates were rotted or had been used by critters over the years, Patchin says several were in good shape and he is getting rid of them.

“Stuff like this, you just don’t find, because after 60 years, wood just goes away and rots and decays, so a pretty interesting find,” he said.

It’s not the first time this year that 1940s-period munitions crates were found in a building demo. A contractor in Prescott, Arizona was amazed to find out the garage he was hired to demo was made up primarily of WWII-era British ammo crates made by Winchester.