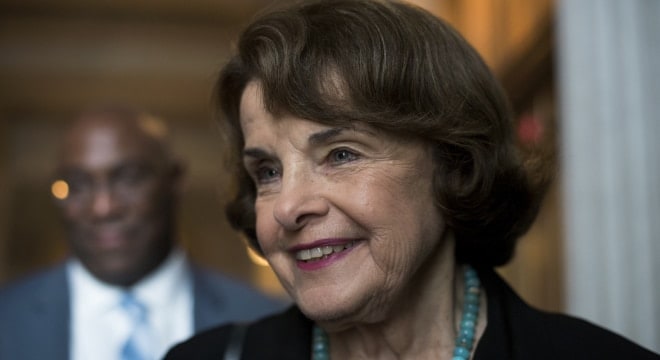 Sen. Dianne Feinstein, D-Calif., talks with a reporter before the Senate Policy luncheons in the Capitol on September 12, 2017. (Photo: Tom Williams/AP)

A bill “to ensure that the right to keep and bear arms is not unlimited” was introduced Wednesday with the intention to restart and expand the former federal assault weapon ban.

Sponsored by U.S. Sen. Dianne Feinstein, D-Calif., and 23 fellow Democrats, S.2095, aims to regulate firearms classified by the bill as “assault weapons” as well as their magazines and bump stocks accessories. Feinstein said the goal of the legislation was that it would be in the wings whenever lawmakers are ready to act on it.

“We’re introducing an updated Assault Weapons Ban for one reason: so that after every mass shooting with a military-style assault weapon, the American people will know that a tool to reduce these massacres is sitting in the Senate, ready for debate and a vote,” said Feinstein in a statement.

The architect of the initial Assault Weapons Ban which passed in 1994 by a narrow 52-48 vote but expired after 10 years, Feinstein has revamped her new effort to include a prohibition on the manufacture, import, or sale of 205 firearms identified by name.

Moving past singling out specific firearms, it would also ban semi-auto handguns and rifles with a detachable magazine and only one “military characteristics” such as a pistol grip, telescoping or folding stock, or threaded barrel. The previous ban allowed a single feature but kicked in at the point of two or more. Likewise, detachable magazines capable of holding 10 or more rounds would be prohibited.

While guns already in circulation would be grandfathered, they would have to be stored using a safe or a trigger lock. Magazines affected by the ban would also be grandfathered, but could not be transferred in the future.

Included in the language of the 125-page bill is a provision that goes after bump stocks but would target a potentially much larger category of devices to include any part or combination or parts that serves to “accelerate the rate of fire of a semiautomatic rifle but not convert the semiautomatic rifle into a machinegun.”

Backers of the legislation argue it is about public safety and that the targeted firearms and accessories do not serve a hunting or sporting purpose.

“There is only one reason anyone would need assault weapons and high-capacity ammunition magazines, and that’s mass murder,” said U.S. Sen. Bob Menendez, D-N.J.

Although the federal assault weapon ban sunsetted in 2004, at least seven states have passed their own blanket prohibitions while local bans exist in the District of Columbia and parts of Illinois. However, many contend the original assault weapon ban was ineffective and statewide bans have endured determined legal challenges.

Though a renewed federal ban has been advocated by Democrats on Capitol Hill and President Obama while he was in office, recent opinion polls found little appetite for a return of such prohibitions among the public.

Feinstein’s proposal has been referred to the Senate Committee on the Judiciary.

Correction, 11/10 9:05 a.m. This article was corrected to remove a reference to active local assault weapons bans in Indiana. They were repealed in 2011 due to strong state preemption laws.