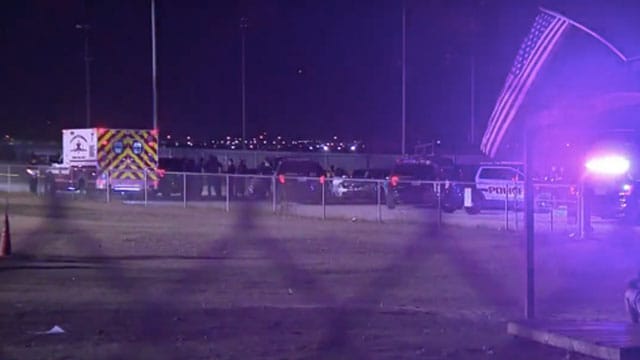 The violence unfolded at a park during a youth football practice. (Photo: KSAT)

A dispute at a San Antonio park Monday night between a man, his ex-girlfriend, and her new boyfriend left one man with severe stab wounds and another dead from gunfire.

Although it appears the gunman acted in defense of another person, however, he is nowhere to be found.

Authorities say they received a call about a disturbance at the South Side Lion’s Park around 8:15 p.m. According to witnesses, 35-year-old Michael Williams confronted his ex-girlfriend and her new boyfriend, 40-year-old Dominic Osborne, according to local reports.

During the confrontation, Williams apparently began stabbing Osborne repeatedly in the neck. At that point, a third male pulled out a gun and shot Williams. Williams was pronounced dead at the scene, while Osborne was rushed to the San Antonio Military Medical Center where he was initially listed in critical but stable condition. His current condition is not known. There were no reports of the woman being injured.

The man who shot Williams apparently fled from the scene. Authorities believe the man is a friend of Osborne, but they have not yet identified or located him. It’s unclear at this point whether the man will face charges, as it appears he acted in defense of another.

At the time of the incident, there were about 100 kids gathered at the park for a youth football practice. Those kids included Williams’ 9-year-old son, who witnessed the entire incident. Police say it’s pure luck none of the children were injured.

Nonetheless, Adria Hall, a coordinator for the youth football league who was at the park when the incident occurred, told KSAT the shooting left the children shaken, but coaches and parents worked seamlessly together to get the children to safety when the violence erupted.

Hall also noted, “This kind of incident could have happened anywhere.”

Hall said, following a vigil with coaches and the police chief, the kids returned to the field Wednesday night.