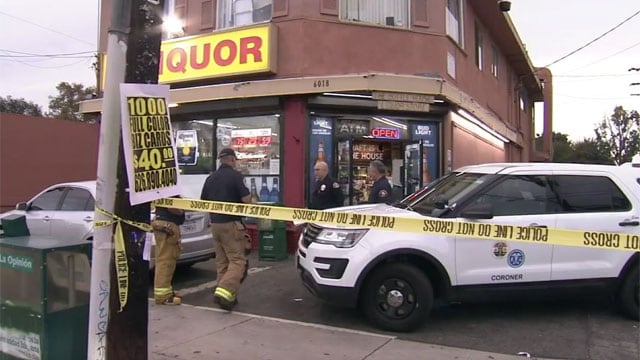 An attempted robbery at a liquor store in Whittier, California, on Monday night left one suspect dead and a second suspect on the run.

The incident unfolded just after 10 p.m. at Bottle House Liquor, the Whittier Police Department said in a news release.

Authorities say the two suspects entered the store wearing hoodies. Both had their faces partially covered, and at least one was armed with a gun. It’s unclear if the suspects said anything, but as soon as the clerk noticed they were armed, the clerk produced his own weapon.

According to Brandy Martinez, who lives in an apartment above the liquor store, police arrived almost immediately after the gunfire erupted.

A weapon was not recovered, but according to authorities, there was evidence at the scene showing the suspects fired their gun. Scoggins said there is surveillance video, but authorities were working to determine which cameras were operating at the time and which ones may have captured the incident, ABC 7 reported.

The deceased suspect has not yet been identified, but he is described as a black male believed to be between the ages of 25 and 35. The suspect who escaped is described by the Whittier Daily News as a black male standing around 5’11” to 6’ tall, and weighing between 160 to 180 pounds. He was last seen wearing a dark-colored hoodie. Authorities warned that he should be considered armed and dangerous.

Martinez said the incident was scary, but she and other residents are calling the clerk a hero.