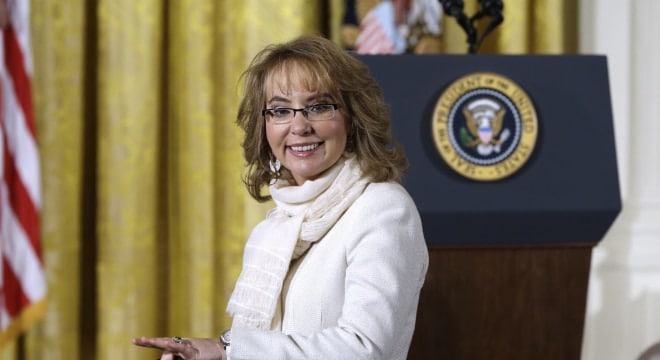 In this file photo from Jan. 5, 2016, former U.S. Rep. Gabby Giffords arrives in the East Room of the White House in Washington to hear President Obama speak about executive actions on gun control.(Photo: Carolyn Kaster/AP)

In the complaint, the Giffords organization asks for communications between Bureau of Alcohol, Tobacco, Firearms and Explosives employees and representatives from the “Washington gun lobby” over an 11-page “white paper,” drafted by the ATF’s associate deputy director and chief operating officer Ronald B. Turk.

Obtained by the Washington Post in January just after Trump’s inauguration, the paper advocates removing restrictions on the sale of suppressors; conducting a study concerned with lifting the ban on imported assault weapons; and requiring a higher amount of crime guns to be traced back to specific dealers before the federal government asks for additional information from those dealers.

The lawsuit argues the white paper recommendations advocated “for a number of policies that were heavily favored and pushed for by members of the Washington gun lobby, including by the National Rifle Association.” The group says it proceeded with the lawsuit after Freedom of Information Act requests filed last month went unanswered. The Giffords filing goes on to say the Trump’s administration “read from the same playbook” as the NRA following recent mass shootings in offering sympathies and condolences “but did not address the pressing need to strengthen the nation’s gun laws.”

The lawsuit seeks any records of communications or meetings between the NRA, National Shooting Sports Foundation and other gun rights groups and Trump administration officials, Turk, or other regulators concerning concealed carry reciprocity, suppressors, bump stocks, and firearm exports as well as government emails in which the controversial white paper was mentioned.

The request largely duplicates an effort for the same information filed last month by the Brady Campaign.

While gun control advocates of all shapes were often invited to the White House in past administrations, it should be noted that Giffords directly had the ear of President Obama, who he described in 2011 remarks following her shooting as a friend. Besides honoring Giffords staffers, the White House invited the former lawmaker and her husband to the Oval Office on the occasion of announcing Presidential Executive Orders on gun control last year as the Obama-administration Secretary of the Navy drew flak for naming a warship after the Arizona native. Last month, Obama appeared in an ad sponsored by Giffords in support of Democrat candidate Ralph Northam in Virginia’s gubernatorial race.