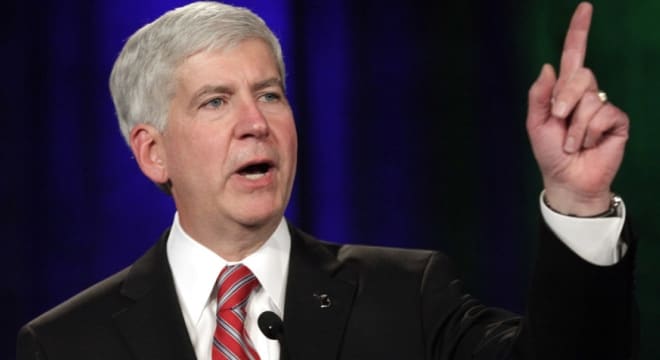 Gov. Rick Snyder warned that he hasn’t changed his position on legislation barring the open carry of handguns in gun-free zones in exchange for lifting the prohibition on concealed carry. (Photo: Paul Sancya/AP)

Michigan’s Republican Governor cautioned legislation that passed the state Senate last week to expand concealed carry rights in gun free zones is similar to one he scuttled in 2012.

While the three bills in question would end the allowance for concealed pistol license holders in Michigan to carry openly on school campuses, swapping it for one where some CPL holders could carry concealed in those same areas, Gov. Rick Snyder said they pose the same problem as a bill he vetoed five years ago.

“I haven’t really changed my position,” Snyder said. “I’m always open to talking about topics and I always look at bills as they come to my desk. But again, I don’t see any real change from where we were.”

In 2012, Snyder told lawmakers he supported barring the open carry of handguns in gun-free zones in exchange for lifting the prohibition on concealed carry as long as private and public property owners could approve their local gun bans, but that SB 59, the bill in question at the time, fell short of that benchmark.

“Unfortunately, the bill did not allow public schools, public day care centers or public hospitals to prohibit persons from carrying concealed weapons on their premises,” said Snyder in his veto message.

The three new bills now in the House would mandate that CPL holders take an additional eight hours of training and fire 94 more rounds than the current standard to obtain an enhancement to their license. Applicants would have to pay up to $20 more for the resulting no-carry zone exemption. Colleges and universities, as well as private property owners, could still refuse to allow guns on property under their control.

“These bills strike a balance between honoring the rights of people to defend themselves and helping ensure learning environments are secure and the school day is not interrupted by the sight of a firearm,”  said legislation sponsor, state Sen. Mike Shirkey, R-Clarklake.

The measures have been referred to the House Committee on Judiciary.