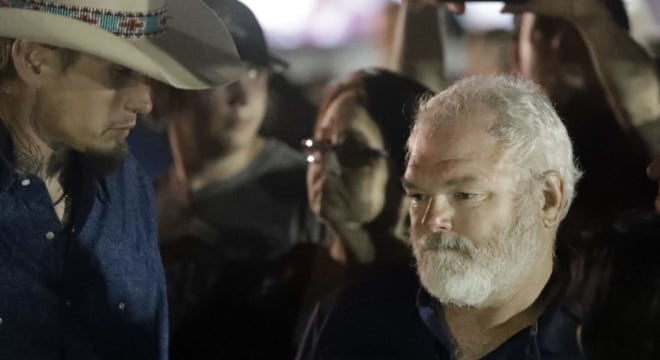 The Sutherland Springs, Texas “good guy with a gun” Stephen Willeford and pickup truck driver Johnnie Langendorff are the subject of a new “We the People” petition to the White House.

A neighbor to the First Baptist church where most of the congregation were either killed or wounded during a scheduled morning service last week, Willeford grabbed a rifle and engaged the shooter, then flagged down local resident Johnnie Langendorff and the pair pursued the wounded murderer for 11 miles while on the phone with police. Now, a petition is urging the two men receive the nation’s highest civilian award.

“Willeford and Langendorff should be honored with the Presidential Medal of Freedom for exhibiting meritorious service in the security of American Citizens,” says the petition. “Their actions were heroic, and they should be honored.”

In an earlier interview with the National Rifle Association, Willeford, a retired plumber and one-time NRA firearms instructor, related how he ran out of his home to engage the church shooter without even taking time to put his shoes on. Stuffing loose cartridges in the magazine of his AR-15, he only had two rounds left on hand at the end of the high-speed chase.

“I stopped his aggression and made him run,” says Willeford, who taught his kids to shoot by the time they were 8-years-old. “I turned his fight into flight, and I did what I had to do.”

Established in 1963 by an executive order from President John F. Kennedy, the Presidential Medal of Freedom is bestowed for “An especially meritorious contribution to the security or national interests of the United States, world peace, cultural or other significant public or private endeavors.”

The petition needs 100,000 signatures to earn a response from the White House and has to reach that goal by midnight on Dec. 8. As of Tuesday, 300 had signed.