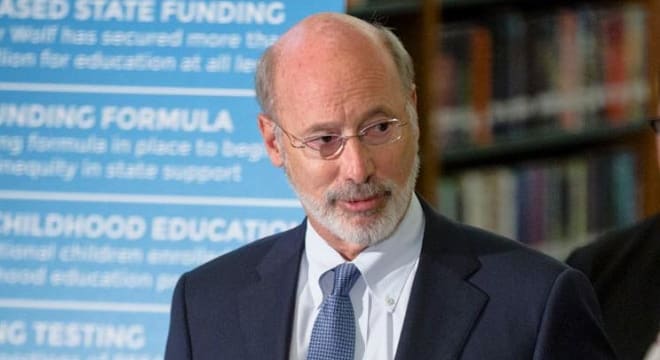 Gov. Tom Wolf (D) supports a move that would tighten Pennsylvania’s guidelines for how those convicted of domestic abuse charges turn in their guns. (Photo: Gov. Wolf’s office)

Pennsylvania’s Democrat Governor this week threw his support behind a drive to strengthen state law on mandatory relinquishment of firearms after misdemeanor crimes of domestic violence.

The measure that Gov. Tom Wolf is backing, SB 501, is part of a package of domestic abuse legislation and specifically aims to pump up the existing surrender gun policy of convicted abusers in the Commonwealth.

“We must protect victims – spouses and children – of domestic violence and attempt to prevent domestic abusers from escalating their violence in everyday places that result in mass murder,” said Wolf in a statement. “It is time for the General Assembly to act on this bipartisan, commonsense legislation to protect victims and reduce violence.”

Proposed in March by state Sen. Tom Killion, R-Delaware County, with 15 co-sponsors, the measure removes the provision for those surrendering firearms by handing them off to friends or family.

“This targeted amendment is very simple; removing third-party safekeeping as an option for a defendant ordered by the Court to relinquish firearms, weapons and ammunition,” explained Killion in a memo to lawmakers. “Moving forward, firearms shall only be relinquished to the County Sheriff or other law enforcement agency or to a Federal Firearms Licensed dealer. No longer would a person be able to transfer the firearms to a relative, friend, neighbor, etc.”

In addition to shrinking the pool of those who can accept relinquished firearms, the bill would require surrenders to take place within 24-hours of conviction, whereas current law allows for a 60-day window.

Introduced in March as part of a five-bill package combatting domestic violence with the support of the Pennsylvania Chiefs’ of Police Association and The Pennsylvania District Attorneys Association, the legislation is still lingering in committee.

Killion contends his bill is not taking aim at gun rights. “I’m not against the Second Amendment. This is not a Second Amendment bill,” Killion said. “This is a domestic violence bill to protect the lives of folks that have been subject to violence within their household.”