Marine reunited with his wartime M1 Garand after 73 years 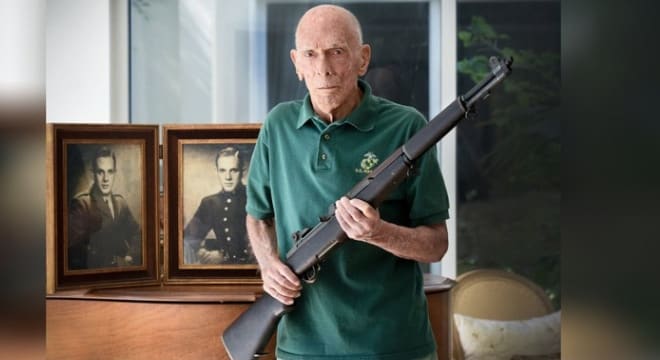 Dick Cowell comes from a long line of military veterans, and the WWII Marine recently was able to add the very rifle he carried during the conflict back to his collection.

“It’s my baby,” Cowell said of the rifle, which amazingly his son, Richard, was able to track down on Gunbroker. “I am very appreciative that Richard was able to find it after 73 years.”

Hailing from a line of veterans whose service dates back to the Civil War, Cowell enlisted in the Marines at age 18 and, when issued his Springfield Armory-produced M1, he dutifully noted the serial number– 3594593– on a paper that his son later found, sparking a six-month search for the gun, which turned up in the hands of a collector in New Jersey. Richard successfully won the auction and had the gun shipped to California, where his own son presented it to the senior Cowell.

“The rifle spent two weeks in my room before I gave it to my father,” Richard said. “I couldn’t take my eyes off it. I couldn’t believe it was finally ours.”

Cowell’s story is similar to that of a North Carolina military retiree who recently got to wrap his hands around an M1 he last saw in 1960 and was located through the services of the Civilian Marksmanship Program. The non-profit federally chartered corporation does, in fact, handle requests for those looking for special guns, such as in the latter case. They have 32 such requests on file, but it is rare they are able to fill them.

“I have been in the serial number/inventory department for approximately eight years, and there have only been about five rifles that have been reunited,” said the CMP’s Jennifer Smith. “If we do not find the rifle in our current inventory when we are contacted, we keep the serial numbers and periodically will search again in case it has been received in new shipments.”