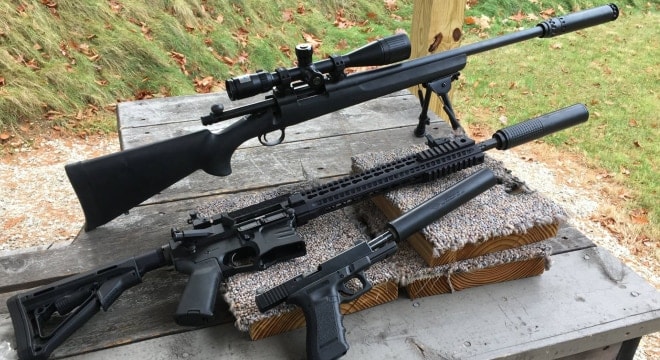 Suppressor-maker YHM is based in Massachusetts but the state doesn’t allow those in the state to legally own the devices. (Photo: YHM)

Legislation to lift the ban on the civilian use and ownership of suppressors in the Commonwealth is set to be heard Thursday by the Massachusetts Joint Committee on Public Safety and Homeland Security.

The bipartisan measures, state Sen. Donald Humason’s S. 1317, and, Sen. Michael Moore’s S. 1340, would allow those able to possess a firearm free to own a suppressor as long as it was in compliance with federal law. Massachusetts is one of just eight states that restrict the devices to licensed manufacturers and law enforcement only.

“It’s more of a muffling, not a silencing,” Moore, a Millbury Democrat, told the Worcester Telegram. “Sportsmen and people living next to firing ranges and sportsmen’s clubs will benefit … Nothing will silence the noise, but this will drastically reduce the noise that abutters of these two facilities will have to hear.”

The language of the bills lifts the Massachusetts ban on silencers, except for their use in the commission of a crime, or for those possessing or selling controlled substances.

While area gun control groups to include Stop Handgun Violence and the Massachusetts Coalition to Prevent Gun Violence oppose the legislation, advocates for the devices argue they are used to protect hearing safety.

“Multiple studies have found that between 70 to 80 percent of hunters never wear earplugs or earmuffs, and nearly half of all target shooters don’t consistently wear traditional hearing protection,” Knox Williams, president of the American Suppressor Association, said in a letter to lawmakers in the state this week. “Thus, it should come as no surprise that for every five years of hunting, hunters become seven percent more likely to experience high-frequency hearing loss.”

Besides safety benefits, Williams pointed out that increased acceptance of the devices could be good for the state’s economy, with suppressor-maker Yankee Hill Machine located in the state and some 80 employees who work for Sig-Sauer in neighboring New Hampshire commuting to work. Further, Springfield-based Smith & Wesson just completed its $10 million acquisition of Gemini Technologies, an Idaho suppressor manufacturer.

According to data from the Bureau of Alcohol, Tobacco, Firearms and Explosives, as of April, Massachusetts had 9,565 suppressors registered under the National Firearms Act in the hands of law enforcement and manufacturers. By comparison, Arizona, a state with a nearly identical population but with an allowance for private suppressor ownership and use, has over 40,000 registered.