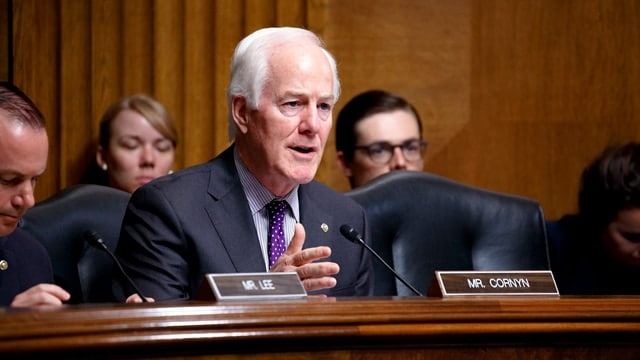 The legislation, S. 2135, incentivizes states and federal agencies to promptly report disqualifying records to the FBI so firearms don’t fall into the wrong hands — and punishes those who don’t. Strengthening the effectiveness of the National Instant Criminal Background Check System — the database gun dealers use to verify a buyer’s identity and criminal history — has dominated the congressional debate since a former Airman murdered 26 people at a church in Sutherland Springs, Texas less than three weeks ago.

“For years agencies and states haven’t complied with the law, failing to upload these critical records without consequence,” Cornyn said. “Just one record that’s not properly reported can lead to tragedy, as the country saw last week in Sutherland Springs, Texas. This bill aims to help fix what’s become a nationwide, systemic problem so we can better prevent criminals and domestic abusers from obtaining firearms.”

Authorities in Texas said the shooter should’ve never owned the semi-automatic rifle used in the attack. Discharged from the military in 2014 after serving time in confinement for assaulting his wife and stepson two years earlier, Air Force officials never forwarded the his criminal records to the Pentagon.

“Our bill marks an important milestone that shows real compromise can be made on the issue of guns,” Murphy said. “I’m grateful that Senator Cornyn was such a strong partner and straightforward negotiator. It’s no secret that I believe much more needs to be done. But this bill will make sure that thousands of dangerous people are prevented from buying guns. It represents the strongest update to the background checks system in a decade, and provides the foundation for more compromise in the future.”

Nearly 41 percent of the denials last year comprised applicants convicted a crime punishable by more than one year in prison — or two years for a misdemeanor. Another 20 percent of applicants were denied as “fugitives from justice.” About 9 percent of denial in 2016 were related to substance abuse — slightly higher than the 8 percent denial rate recorded in NICS’s 19-year history.

Some 5,638 denials were issued based on mental health records, according the report, or about 4.6 percent of the total applications denied in 2016. The rate is low in comparison to the system’s 19 percent denial rate overall for those adjudicated mentally ill. It’s the disqualifying category that draws the arguably most ire — politically — for its perceived role in preventing mass shootings, including at the Texas church earlier this month.

The gunman reportedly escaped a mental health facility in 2012 where he was being held for sneaking guns onto an Air Force base and threatening his military superiors, according to the Washington Post.

“We can make the agencies do it,” Cornyn said earlier this month. “According to the Department of Justice, the number of these records that are actually uploaded is staggeringly low. That is unacceptable and it must change. We need to better understand why our existing laws didn’t work in this instance and that’s what my proposed legislation will do.”

“We commend Sen. Cornyn for his leadership to encourage state and federal agencies to enter all applicable records in the FBI’s National Instant Criminal Background Check System,” said Lawrence G. Keane, NSSF’s senior vice president and general counsel. “This legislation will provide states with the necessary resources to promptly and efficiently provide disqualifying records to NICS on those who are prohibited under current law from possessing firearms. Federally licensed firearms retailers rely upon NICS to prevent the sale of firearms to prohibited persons. This legislation will fix NICS so that background checks are accurate and reliable.”