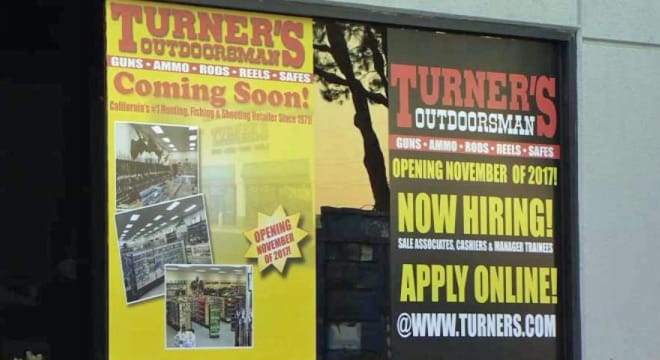 Turner’s started business in 1971 and has 20 outlets in California, though the opening of its new location in San Carlos is up in the air after action last week by the City Council. (Photo: NBC Bay Area)

The San Carlos City Council last week passed a 45-day ban on any new gun stores setting up shop in the city limits just as a Turner’s Outdoorsman was scheduled to open.

Passed 4-1 after an emotion public hearing which local media reported that hundreds attended, the move will keep the vendor’s doors at their newest location closed for now.

Turner’s, which operates a chain of 20 stores throughout California, argues only a small portion of their floor space is dedicated to firearms and ammunition sales and they comply with all state and federal laws. Further, in a letter penned to the City Council by the National Rifle Association and its state affiliate, say they invested over $118,000 in development of the San Carlos location that it leased only after it secured approval from the City’s planning manager, staff, and Chief of Police.

The city has the option of extending the moratorium for two years.