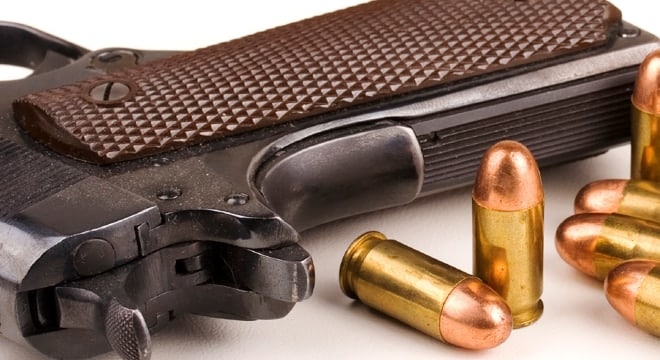 The measure will speed up the now two-year saga of transferring surplus M1911 .45ACP handguns from Anniston Army Depot to the Civilian Marksmanship Program. (Photo: NSSF)

The 2018 National Defense Authorization Act was approved Thursday to include a plan to transfer the U.S. Army’s remaining stock of .45 ACP M1911A1 pistols to the Civilian Marksmanship Program.

Added as an amendment while the NDAA was in debate in the House Armed Service Committee, it would speed up the transfer of potentially the largest remaining stock of military surplus World War II-era handguns in government hands to the public. The mammoth legislation, which outlines $700 billion in overall defense spending, cruised to final approval on a voice vote in the Senate and now heads to President Trump.

“I call upon the President to sign this important legislation into law—and in doing so acknowledge that this is the level of defense spending necessary to meet current threats, prepare for the challenges of an increasingly dangerous world, and keep faith with our men and women in uniform,” said U.S. Sen. John McCain, R-Ariz., the Armed Services Committee chairman.

Exceeding the budget sequestration spending cap by $85 billion, the bill includes purchases for more F-18 and F-35 fighters as well as more Littoral Combat Ships than the Trump administration asked for, which could prove a sticking point.

On the handguns headed to the CMP, the bill instructs the Secretary of the Army to conduct a two-year pilot program that will transfer “not less than 8,000 surplus caliber .45 M1911/M1911A1 pistols” in 2018 with a cap of no more than 10,000 transferred per fiscal year. The program would then be reviewed to ensure the guns were sold by CMP in accordance with applicable federal laws and evaluate its cost to the Army.

In 2015, President Obama signed the FY16 spending bill into law, which authorized the Army to send up to 10,000 of their estimated 100,000 surplus 1911s to the CMP during a one-year pilot program, though none were transferred.

Fast forward to today and, while Depot officials earlier this year showed Guns.com crated 1911s ready to transfer, and CMP is eager to receive them to begin the lengthy process to inspect, grade, and sell these pistols to the public, the guns are still in a holding pattern with the military spending an estimated $2 per gun, per year, to store the surplus weapons.

The CMP is a federally chartered non-profit corporation tasked with promoting firearms safety training and rifle practice. It originated as the Office of the Director of Civilian Marksmanship in 1903 under orders from Congress to improve the country’s marksmanship skills to minimize training in case of war. Split off from the U.S. Army under the Clinton administration in 1996, it still conducts training courses and holds shooting competitions nationwide but draws its primary source of funding through the sale of surplus firearms to qualifying members of the public, which were donated to the organization by the Army.