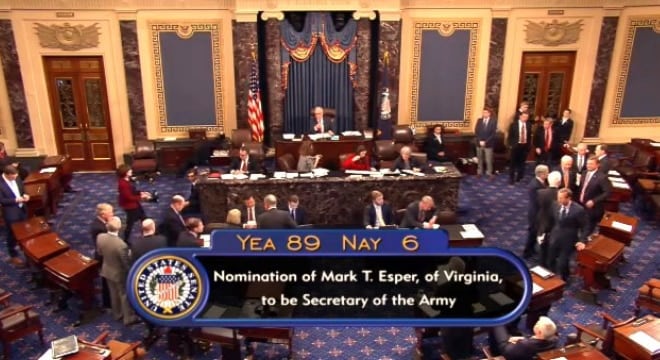 Dr. Mark Esper was confirmed by a vote in the Senate, 89-6, to become the 23rd secretary of the Army (Photo: U.S. Senate)

Esper was given an easy 89-6 approval by the Senate last week after being favorably reported by the Armed Services Committee earlier this month. The approval fills a spot left vacant for most of the year after the departure of Eric Fanning, President Obama’s Secretary of the Army, in January.

A former vice president of government relations at Raytheon, Esper graduated near the top of his class at U.S. Military Academy and reached the rank of lieutenant colonel in the military which included service in the First Gulf War with the 101st Airborne Division which resulted in a Bronze Star. Since then, he has been a Congressional staffer and served in President George W. Bush’s administration as a Deputy Assistant Secretary of Defense, picking up a master’s degree from Harvard and a doctorate from George Washington University along the way while remaining in the Virginia National Guard until 2007.

During his confirmation process, Esper, who will head the Army during its ongoing effort to find upgrades and replacements for its existing small arms including the M4A1 carbine and M2A1 and M240 machine guns, said he was open to options, especially when compared to the recent XM17 Modular Handgun contract process.

“I believe the Army’s efforts to upgrade its combat service rifle and machine guns must be far more effective and efficient than the process by which it selected its new handgun,” said Esper. “I also believe small arms modernization is an area very suitable for outreach to the commercial sector for an ‘off the shelf’ or easily adaptable solution for a new weapon.”

Esper said the Army should “look at what its allies are using to see if their systems can be used/adapted for the Soldiers’ needs,” and that he intended to “pay close attention to the Army’s small arms modernization plans to ensure these programs are within cost, schedule, and performance objectives.”

While the civilian heads of the service branches rarely dabble in gun rights issues, it should be pointed out the Secretary of the Army’s office ultimately controls the flow of surplus small arms to the Civilian Marksmanship Program for transfer to the public. Soon, this would include stocks of M1 Garands returning from overseas as well as thousands of M1911 .45ACP pistols currently in storage. The Army currently stores millions of Vietnam-era M16A1 rifles and, in the future, will have to decide what to do with withdrawn M9 and M11 pistols replaced by the new XM17.

Though the Obama White House signed a measure allowing transfer of surplus M1911s to the CMP in 2015, and Guns.com found that both the Army was ready to move the guns and the marksmanship program was ready to receive them, any potential move was stalled while the Secretary’s job was vacant.

Esper is Trump’s third nominee for the position, following that of billionaire and Army veteran Vincent Viola, who withdrew from consideration citing his inability to meet the Pentagon’s requirements for personal business which would have included transferring ownership of the Florida Panthers hockey franchise; and Army vet and Tennessee lawmaker Mark Green, who backed away from the job following controversy over past comments he made about gays and Muslims.