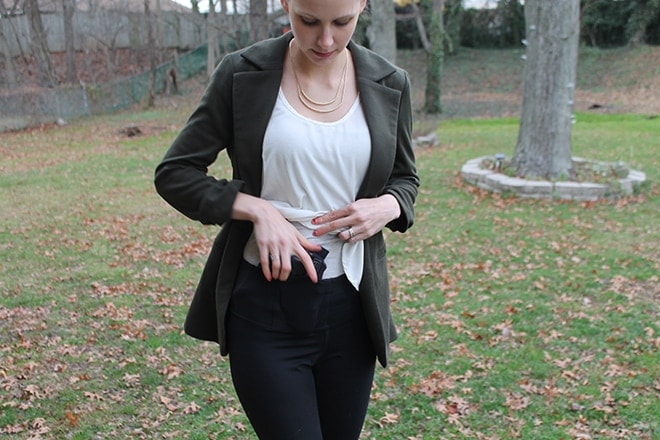 Concealed carry has evolved from the simple days of a holster on the hip. These days, gun owners tote firearms in an array of set-ups; but one style of holster, in particular, is steadily gaining steam — concealed carry clothing.

The hallmark of concealed carry clothing is that it marries traditional clothing styles with an integrated holster. Undershirts, shorts, leggings, even jackets and vests are now creeping into the holster marketplace sporting handy pockets ready to carry gun owners’ favorite sidearms.

“(Concealed carry clothing) was a natural extension from our uniform business. We were meeting with our end users and they consistently asked for more casual looking clothes that were built with a tactical mindset,” Alarcon said. “With our expansion into the concealed carry area, it’s really opened up many opportunities for us to provide real solutions to many areas were men and women have historically just been making do with product that wasn’t designed for their needs.”

The company launched several items including shirts, tanks and even jackets for both men and women to allow consumers to tote guns of varying sizes. Alarcon said the reception has been fantastic and is driving further innovation on 5.11’s concealment apparel.

“They’ve been received very well as we’ve been able to bring some real innovation, high performance and comfort to gear that looks great and totally at home in everyday environments like our Apex Pants and Defender-Flex Jeans,” he said. “We’re growing our overall concealed carry offering and you’ll see us expand into performance outerwear, additional packs and bags, growth into women’s specific options and new styles of shirts, shorts and pants.”

Marilyn Smolenski founded Nickel and Lace, a holster company that focuses on built-in holster systems for women, after seeing a need for more concealment options for women who couldn’t support a standard or traditional holster. Smolenski said the advantage to a built-in system like the her Luxe Lace Compression Camisole is that women get more bang for their buck.

“The advantage of Nickel and Lace having built-in concealed carry capabilities is that these pockets are versatile,” Smolenski told Guns.com in an email. “The holster pockets can also be used to carry other self defense items, keys, personal items, money, etc.”

Female gun owners have long lagged behind men in numbers, but according to a National Shooting Sports Foundation study in 2015, the minority group is gaining steam in the firearms sector. The study found that women account for the fastest growing gun owning demographic. Since the study’s release at SHOT Show in 2015, retailers have upped their marketing and product offerings to entice more females.

With a litany of “women specific” gear, it’s no surprise that holster makers would seek to find a niche angle to satisfy female gun toters looking for a convenient means of carry. For 5.11 this means adding more options to its lineup of concealed carry gear.

Though Nickel and Lace’s new products have been temporarily put on hold so that it’s CEO can run for an Illinois House of Representatives seat in 2018, Smolenski said the company intends to continue to cater to women.

“Our clothing line has been pulled for the duration of my campaign; however, I am still active with Nickel and Lace and have plans to attend/participate at USCCA’s 2018 expo,” she said.

With the subtle push from consumers looking for alternatives to traditional holster rigs, manufacturers seem to be poised to take on this new contingent of clients looking for an immersive clothing and concealment experience.