How, when and where will the CMP 1911s be available? 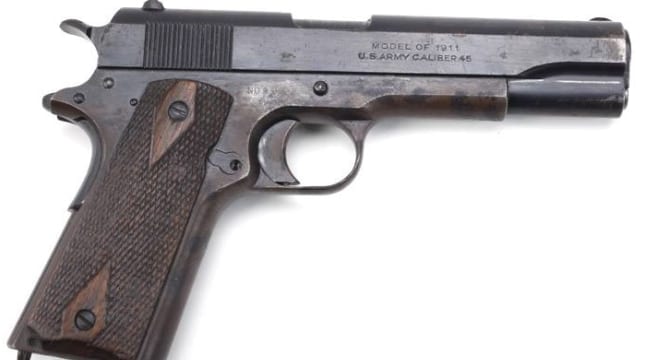 U.S. martial M1911s were in production from 1912-1945 from companies as diverse as Remington-UMC, Singer, and US&S. (Photo: National Firearms Museum)

With a mandate to transfer the Army’s stockpile of vintage M1911 pistols to the Civilian Marksmanship Program looming, what should those interested in picking one up expect?

The 2018 National Defense Authorization Act approved by Congress last week consists of hundreds of sections ranging from reports on the U.S. strategy in Syria to programs authorizing new icebreakers. One of these sections outlines a two-year pilot program for moving the Army’s surplus .45ACP GI longslides to the federally chartered non-profit corporation tasked with promoting firearms safety training and rifle practice. Here’s what to expect.

What’s up for grabs?

In 2015, U.S. Rep. Mike Rogers, R-Alabama, disclosed that the military currently spends about $2 per year to store 100,000 Model 1911s that are surplus to the Army’s needs. While 8,300 have been sold or loaned in recent years – largely through the Department of Defense’s 1033 Program, which offers eligible law enforcement agencies up to one pistol per full-time officer – the guns still on hand have in many cases been stored since the 1980s when they were withdrawn from service in favor of the then-new Beretta 92F (M9). Production of 1911’s for military contracts largely ended by 1945, meaning the guns on hand date to the World War II-era or before.

On a visit to the “Army’s attic” the Army Museum Support Center at Anniston Army Depot earlier this year, Guns.com was shown crates packed and filled with M1911s pulled from the military’s museum stocks that were in excess of the service’s needs, pending shipment to the CMP once the handgun program got underway. This means there are literally everything from museum pieces on the high-end of the spectrum to stripped receivers on the low end and everything in between.

How do you get them?

On the bright side, there are literally thousands of shooting and collecting clubs as well as Veterans organizations such as the VFW that are affiliated with the CMP and showing marksmanship or firearms knowledge is as easy as sending in a copy of a concealed carry permit, military service records or proof of participation in a shooting competition.

When will they be available?

First off, the NDAA still must be approved by the White House and signed into law. Under its guidelines, no less than 8,000 M1911s — and no more than 10,000 — are to be sent by the military to the CMP each year for the next two years, which will require the Secretary of the Army to implement. Transporting the guns from the Anniston Army Depot across town to the CMP’s warehouses is the easy part. The lengthy process will start when CMP starts going through the mystery crates and inspecting, grading, test-firing and cataloging what is inside, which could take months. Some guns could be incomplete. Others could need significant repairs. The odds of finding a mint-in-the-box specimen that has escaped 70-years of Army life without being issued will be slim, but even those guns will have to be checked and certified.

What will they cost?

Military contract 1911s were made by several commercial vendors to include Colt, Ithaca, North American, Remington Rand, Singer, UMC and Union Switch & Signal as well as in government arsenals at Springfield Armory and were often reworked by unit armorers in the field and at depots during their lifespan.

Some extremely rare variants such as 1916-marked examples, “big stamp” guns with oversized property marks, and those with limited runs, as in the case with Singers and US&S, currently garner soaring prices with collectors. Such rare birds, if found in good condition from the Army, will likely be culled from the herd and sold on individual auctions through the CMP’s site, which is customary for sought-after models.

The more rank and file examples would likely be sold graded in varying degrees such as the group does with their M1 rifles (e.g. rack-field-service-special-correct-collector) at sliding prices close to market scale, sorted by receiver manufacturer.

Still, no matter what, the gun will be an actual real-deal “Government Issue 1911” which is a timeless aesthetic that has proved to be popular with a host of gun makers over the past century and never goes out of style.

As for feedback from the CMP? The organization posted late Wednesday that, “Because of the limited number and the exceedingly high demand for the pistol, and the great level of Congressional scrutiny, the Board of Directors will make a decision regarding how sales will be handled. We have no further information at this time.”