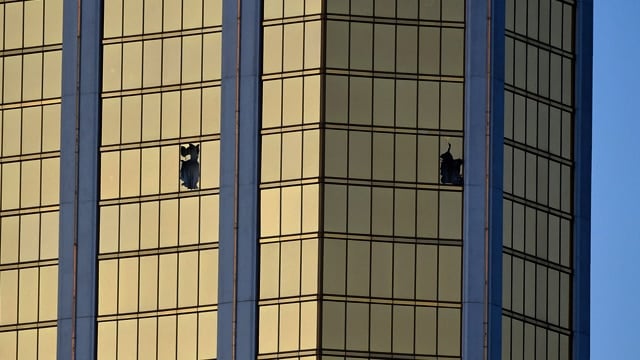 Hundreds of victims of the Oct. 1 massacre in Las Vegas are filing lawsuits against the Mandalay Bay Resort and Casino and its parent company, the organizers of the Route 91 Harvest Music Festival, and the estate of the man who pulled the trigger, Stephen Paddock.

In all, five lawsuits were filed Monday in Los Angeles Superior Court, according to Reuters. The largest suit included as many as 450 victims.

Fifty-eight people were killed, and hundreds more injured when Paddock opened fire from the 32nd floor of his hotel room for more than 10 minutes before turning a gun on himself.

Houston-based attorney Muhammad Aziz is heading up the lawsuits and says they were filed in California because that’s where most of the plaintiffs are from. The victims say MGM Resorts International, as well as its subsidiary Mandalay Corp, failed to monitor Paddock’s activities. They allege the company did not adequately train staff members or deploy adequate security measures.

“The incident that took place on October 1st was a terrible tragedy perpetrated by an evil man,” MGM told Business Insider. “These kinds of lawsuits are not unexpected and we intend to defend ourselves against them. That said, out of respect for the victims, we will give our response through the appropriate legal channels.”

The plaintiffs say Live Nation, which operates in California, failed to provide adequate exits at the concert, and failed to give proper training to staff members in the event of an emergency.

The victims also sued the shooter’s estate. Paddock is thought to have been worth millions.

Several other lawsuits have been filed since the shooting, most of them in Nevada. One previously filed suit named Slide Fire Solutions, the company that manufactured the bump stock Paddock used. Aziz said the lawsuits filed Monday didn’t go after Slide Fire because many of his clients support the Second Amendment.

“We want to focus on hotel and venue security, not turn this into a gun rights case,” he said.