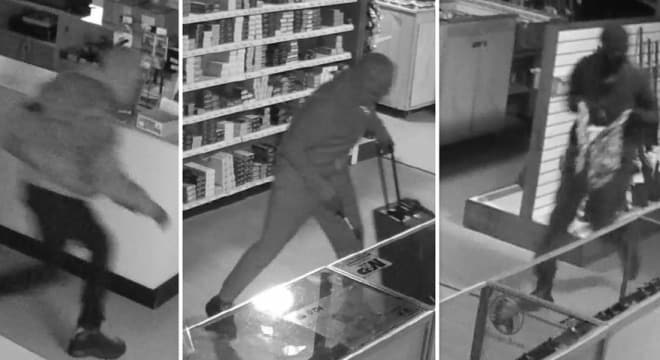 The ATF and NSSF have teamed up to offer a $10,000 reward for information on those who broke into Kinsey’s. (Photo: Northwest Regional Police Department)

Authorities in Lancaster County are looking for three individuals regarding the Saturday night burglary of Kinsey’s Outdoors in Mount Joy Township.

The Northwest Regional Police Department, in conjunction with the Bureau of Alcohol, Tobacco, Firearms and Explosives are investigating the weekend theft which, though officers responded to an alarm within four minutes, resulted in the loss of 72 handguns from the Pennsylvania firearms retailer.

According to a release, the suspects entered the store by smashing the front doors of the business then removed the handguns after smashing display cases. Clad in masks and gloves, the suspects used a rolling suitcase to leave with the firearms.

Lancaster County District Attorney Craig Stedman described the crime as “extremely alarming and serious,” saying he could not recall an instance where an equivalent number of guns were stolen at the same time in the county.

The ATF, in conjunction with the National Shooting Sports Foundation, is offering a $10,000 reward for information on the theft and is directing those with tips to call police at 717-367-8481 or the ATF at 888-ATF-GUNS.

According to federal regulators, 7,488 firearms were reported stolen from federally licensed dealers last year but only 166 of those were in taken during burglaries in Pennsylvania. The state saw 208 guns stolen in 2015.